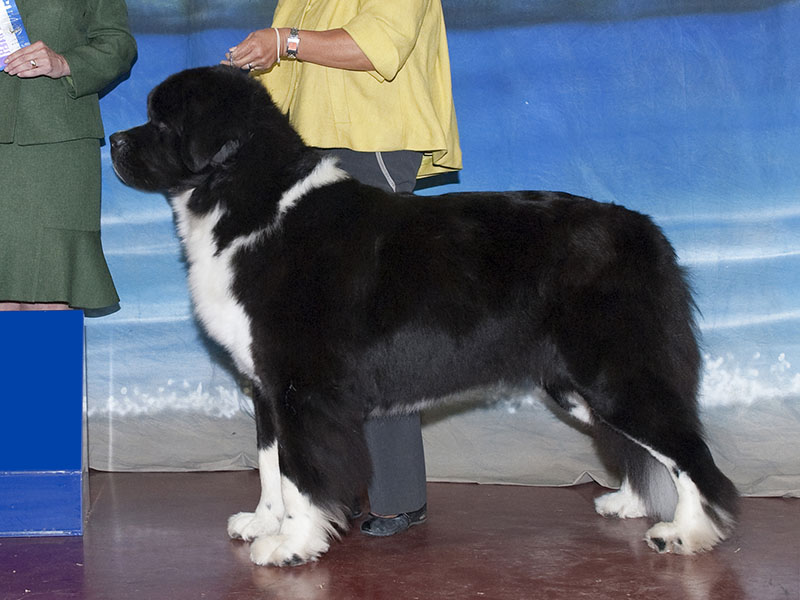 There are many stories about the origin of the Newfoundland. The breed may be a descendant of nomadic Indian dogs, or of Viking bear dogs. Many believe the Newfoundland originated from crosses between Tibetan Mastiffs brought to Canada by British or European fishermen and local dogs, early in the 1700s. In any case, the resulting breed found a niche aiding fishermen off the coast of Newfoundland, Canada. This gentle giant was used for hauling in nets, carrying boat lines to shore, retrieving anything that fell overboard, and rescuing shipwreck and drowning victims. The Newfoundland was, and still is, an outstanding water rescue dog. The breed was also used to haul lumber, pull mail sleds, deliver milk, and carry loads in packs. During World War II, Newfoundlands hauled supplies and ammunition for the armed forces in blizzard conditions in Alaska and the Aleutian Islands. Today, the Newfoundland serves primarily as a family companion, but is also very good at water trials, obedience, carting, and backpacking.

The Newfoundland is a stately, strong, and massive dog, slightly longer than tall, with a broad, heavy head. The wide muzzle is rather short and squared off. The small triangular ears are pendant. The small eyes are dark brown and the nose generally black, except on bronze-colored dogs, which have brown noses. The feet are webbed for better swimming. Dewclaws should be removed on the hind legs. The tail hangs down. The water-repellent long outer coat is flat, oily, and slightly wavy with a thick, oily undercoat. Comes most often in black (sometimes with a little white on the feet, end of tail, or chest) and Landseer (white with black markings). Sometimes also in brown or gray.

Beware of hip dysplasia (do not let the Newfoundland get fat). Buy only from stock with OFA, PennHIP, or another national hip dysplasia clearance. Also prone to a hereditary heart disease called sub-aortic stenosis (SAS). Breeders should have puppies’ hearts checked by a veterinary cardiologist at 8 to 12 weeks of age. Adult Newfies should be cleared of SAS again before breeding. Sensitive to heat. Provide plenty of shade and cool water in warmer weather. Drinks a lot of water and may be messy about it, as he loves to get wet. Tends to drool, though not as much as some other giant breeds. The Newfoundland blows his coat twice a year, in spring and in fall, with the heaviest period coming in the spring. Though puppies require a lot of food, an adult Newfoundland eats only about as much as a retriever. Loves to swim. If backpacking near water, don’t let the Newfoundland carry your sleeping bag or you may spend a very damp night. The Newfoundland Club of America sponsors water rescue and drafting tests.

A noble dog, calm, gentle, loyal, and trustworthy with a sweet temperament. Dignified and peaceable. Very devoted. Can become so attached to his owners that he cannot adapt to a new home. Good and brave. Intelligent enough to act on his own when needed. Protective, but tends to place himself between the intruder and his family rather than bark or growl. Can recognize a dangerous situation and will generally act if the family is threatened. Patient, playful, and loving with children—a born babysitter. Very sociable. Enjoys the outdoors, but also requires companionship. Males may be aggressive with other males, but the breed is generally good with other animals. This dog’s huge body tends to move rather slowly. Take this into account during training.

Books about the Newfoundland