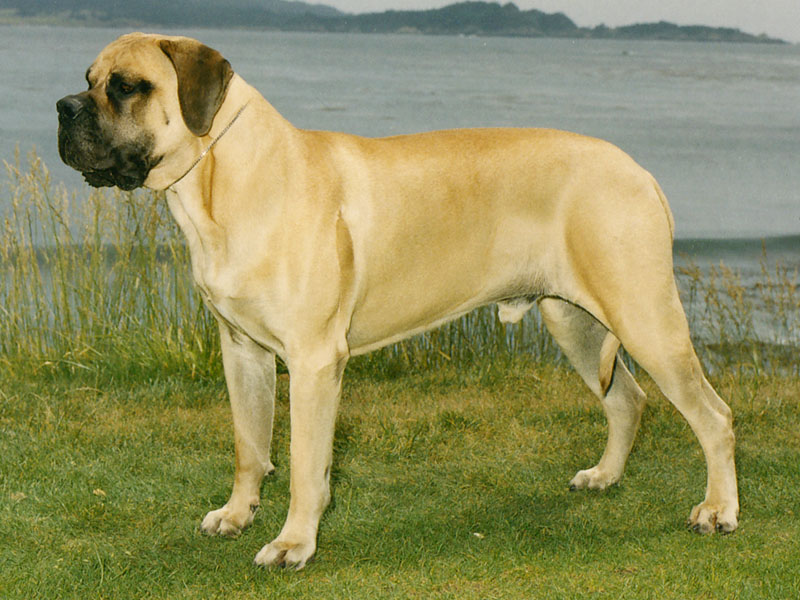 Found in Britain as early as the Roman invasion, the noble Old English Mastiff was probably brought to that island by Phoenician traders as early as the sixth century BC. The thirteenth century explorer Marco Polo wrote that he saw 5,000 Mastiffs at the court of the Chinese emperor Kubla Khan; those dogs were reportedly used for hunting and in war. Since then, humans have used the Mastiff as an arena gladiator in the bloody sports of bull, bear, and dog combat, as a sheep guardian, as a cart puller during war, and as a personal bodyguard, protector, and companion. A Mastiff came to America on the Mayflower; the colonists subsequently imported others of this majestic breed. By the end of World War II, Mastiffs were almost extinct in England because the English believed it was unpatriotic to keep a dog that ate as much as a soldier should. However, with fresh imports from the United States and Canada, the breed is once again well-established in today’s England and has become revered for both its protective abilities and its extraordinary gentleness.

One of the heaviest breeds, a male Mastiff can exceed 200 lbs. This dog is very massive, powerful, and muscular. It is heavy-boned and slightly longer than tall. The head is heavy and square with a short muzzle. There is a black mask around the eyes and nose, no matter what the general coat color. The small ears should also be dark colored. The teeth should meet in a scissors or slightly undershot bite. The tail is set high and tapers to the tip. The short coat comes in brindle, fawn, and apricot, and is easy to groom.

Beware of hip and elbow dysplasia; buy only from stock with OFA, PennHIP, or another national hip dysplasia clearance. The Mastiff can be subject to cystinuria (a kidney disease), eye problems, cancer, and epilepsy. Tends to drool, wheeze, and snore (loudly). Do not overfeed. Essential to socialize thoroughly as a puppy. Exercise the Mastiff regularly. Needs lots of companionship in order to feel it is part of the family. Also needs basic obedience training, as he would be hard to control otherwise. The average lifespan is between eight and 10 years.

Originally valued for his ability as a fierce guard and fighting dog, today’s Mastiff is a gentle giant. Calm, steady, and docile, this dog is great with children if raised with them (not recommended for toddlers, though, because of his great size). Good-natured but very large and heavy, the Mastiff responds well to gentle, patient training. Loves to please. Dominance varies widely in the breed, depending on the lineage. Can be aloof with strangers or fairly friendly. Do not hit a Mastiff or you are asking for it! A born guard dog, brave, and loyal. Generally holds intruders at bay rather than attacking and will step between owner and stranger when it feels trouble is brewing. Protection training is unnecessary for this naturally protective breed. Very possessive of home, family, and car. May be combative with other dogs if not very well- socialized as a puppy.

Books about the Mastiff