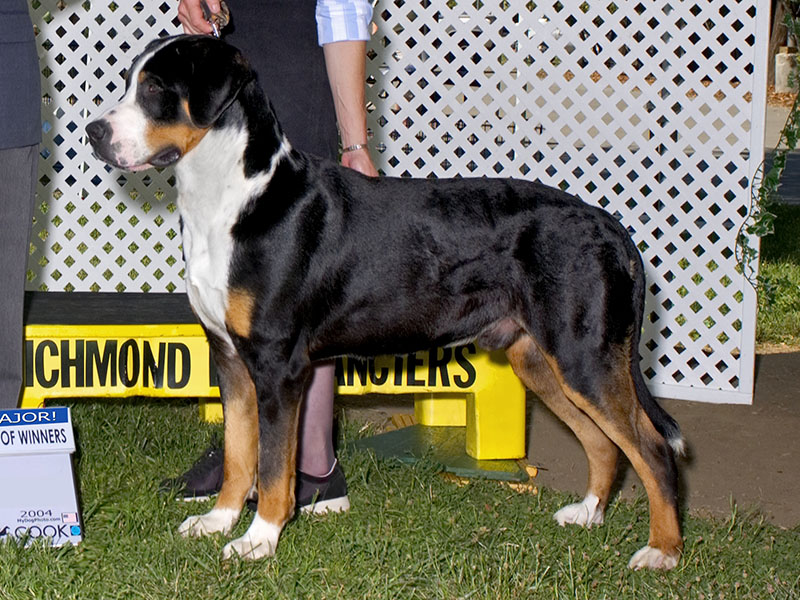 The Greater Swiss Mountain Dog is a large, strong, muscular draft dog. The body is slightly longer than it is tall. The front legs are straight and strong with rounded, compact feet. The chest is broad and deep, and the breastbone extends slightly ahead of the legs. The head is large with a broad, flat skull and slight stop. The skull should be the same length as the muzzle. The muzzle is blunt, and the nose is black. The teeth should meet in a scissors bite. The eyes are dark brown (blue eyes are a disqualification) with a gentle, but lively expression. The eye rims are black. The pendant, medium-sized ears are triangular. The long tail reaches to the hocks. The Greater Swiss Mountain Dog has a beautiful tricolor double coat (black with rich rust and white markings). Rust markings include a spot over each eye, rust on the cheeks, and on either side of the chest. Symmetrical markings are preferred. The tip of the tail, a blaze on the muzzle, and a large marking on the chest are white. A white collar or patches on the neck are permitted. Any base color other than black is a disqualification. The outer coat is about 1 to 1-3/4 in. long, lined with a dense undercoat.

Gets along well with family pets, but may have to be taught not to chase. Slow to mature, both physically and mentally. Puppyhood may last two to three years. Like many large, deep-chested dogs, the Greater Swiss Mountain Dog is prone to bloat. Beware of hip dysplasia; buy only from stock with OFA, PennHIP, or another national hip dysplasia clearance. Many of these dogs have distichiasis, a condition in which extra eyelashes grow along the edge of the eyelid. These extra lashes can curl inward and scratch the eye. Though the condition may not pose any problem, it sometimes requires surgical correction. Some lines have incidences of epilepsy and digestive disorders. Don’t feed bones of any sort to Greater Swiss Mountain Dog, as their powerful jaws can crunch up just about anything.

Steady, watchful, and protective, but not aggressive. Willing; loves to please. Loyal and adoring. Territorial; the Greater Swiss Mountain Dog should be introduced to newcomers, but will quickly warm up to those the family accepts. An excellent, alert watchdog that will bark at strange noises and intruders. Needs to be part of the family and prefers to be with his people all the time.