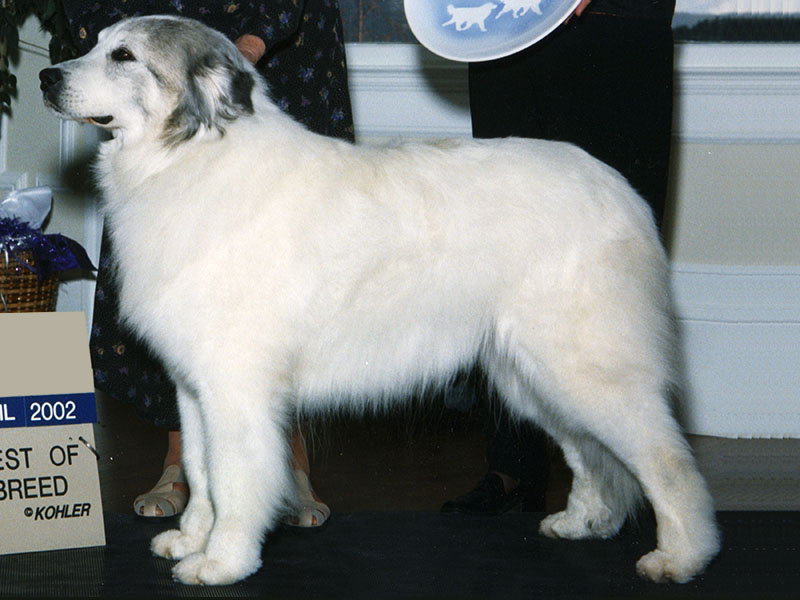 The imposing Great Pyrenees, also known as the Pyrenean Mountain Dog, has guarded his masters’ flocks from predators for centuries in the rugged Pyrenees Mountains between France and Spain that give the breed its name. The first large white livestock guardian dogs likely arrived in the Pyrenees from the Middle East as long ago as 3000 BC, accompanying migrating shepherds and their flocks.

In 1675, the Great Pyrenees was named the Royal Dog of France, where it gained popularity with nobles as an estate guardian. In the 1850s Queen Victoria owned one, but by the end of the nineteenth century, the breed had gone into decline. A group of French enthusiasts rebuilt the breed at that time, and two clubs were formed, each with its own standard.

The two world wars took a heavy toll on the Great Pyrenees, but dedicated breeders rallied to restore the breed after each war. The first serious breeding program in the United States was established in the 1931, and the AKC granted recognition in 1933. Today you will still find Great Pyrenees working as livestock guardians and as valiant, trusted companions and protectors of the home and family. They have also become successful therapy dogs.

The Great Pyrenees is a large, majestic, mostly white dog with a black nose and dark eyes. This is a dog of medium substance, slightly longer than tall. The topline is level, and the chest is fairly broad.

The head is wedge-shaped with a slightly rounded skull and no apparent stop. The head should be well-balanced and in good proportion to the rest of the dog. The medium-sized ears are pendant. The almond-shaped eyes are dark brown with a thoughtful, intelligent, dignified expression. The nose and eye rims are black, and the tight-fitting lips must have black pigment. Where the hair from the upper face meets that on the lower face, a characteristic line is formed. The teeth ideally meet in a scissors bite, but a level bite is permitted.

The mostly white coat may include some areas of yellow, badger (a combination of gray and yellow hairs), reddish brown, tan, or gray. The configuration of these non-white areas is not important, but no more than one-third of the coat on the body should be non-white. The thick double coat is even thicker around the neck and shoulders, forming a mane that can be quite pronounced in males. The backs of the legs are feathered and the long, plumed tail reaches at least to the hocks, curling upward at the end in the “shepherd’s crook.” Unlike some other breeds, the Great Pyrenees’ rear double dewclaws are actually boned and functional—they should definitely not be removed.

To avoid hip dysplasia, which is fairly common in the breed, be sure to buy only from stock with OFA, PennHIP, or another national hip dysplasia clearance. The more relatives of the sire and dam have cleared hips, the less likely your dog will experience this potentially crippling problem. Some lines of Great Pyrenees have experienced luxated patellas, a condition where the kneecaps on the hind legs slip. Because this condition cannot be diagnosed until the pup is 12 to 14 weeks old, ask your pup’s breeder to provide a health guarantee ensuring that you can return the puppy should it turn out to have luxated patellas. It is also wise to have your vet do a manual check for tight knees as part of an initial exam.

Bloat is a potentially life-threatening condition where the stomach becomes very swollen and can even twist. This is a medical emergency that can quickly become fatal, so if you suspect bloat, take your dog to the vet immediately! Bloat can be an issue for many large breeds, and it tends to occur more in some lines of Great Pyrenees than in others. Ask breeders if there is bloat in their line as part of your investigation process.

Bone cancer affects many large breeds, and the Great Pyrenees is no exception. If a dog starts limping between 5 and 9 years of age and you know his hips are clear, you may need to look at the possibility of cancer.

Backyard breeders can be irresponsible and ignorant about hereditary disorders, particularly if they are “only” breeding to produce livestock guardians rather than for show or health. It’s best to get your Pyrenees from a reputable source who understands hereditary issues and how to minimize them.

The Great Pyrenees sheds all year round and blows its coat once a year. The white hairs can be very persistent on your furniture and clothing, so this is not a good breed choice for immaculate housekeepers. Regular grooming of the Great Pyrenees takes approximately 30 minutes a week. Show grooming can be much more extensive, depending on the line. Working Pyrenees may need to have the hair on the undersides of the feet, between the toes, and on parts of the belly and genitals clipped or shaved to keep burrs off and to allow “foxtails” (awned grasses) to be spotted before they burrow in and cause injury. In the winter, this type of trimming can also help prevent mud and ice balls from developing on the coat. The main coat of the Great Pyrenees should never be shaved, as this removes the natural insulation the coat provides and can lead to sunburn.

Great Pyrenees can be world-class barkers, as barking to establish territory was an important behavior for the working sheep guardian out in the field. It’s critical to train the dogs at an early age to limit their barking.

Young Great Pyrenees can be very destructive if left indoors alone. Crate training and proper confinement can prevent this kind of problem behavior by removing the opportunity.

Courageous and calm, the Great Pyrenees is highly protective of his flock and his territory. The breed is gentle with and tolerant of children and other young creatures, and feels a great sense of responsibility toward his charges. This is a serious watchdog and guardian that thinks about the proper course of action for each situation. He tends to be reserved with strangers, but any excessive nervousness, shyness, or aggression toward people is considered an unacceptable temperament for the breed. The Great Pyrenees will accept strangers his family accepts, but will not tolerate a stranger entering the house when the family is not at home. As this breed is protective of his territory, and not a personal protection dog like a Rottweiler or German Shepherd, it’s possible that the Great Pyrenees may not be protective of his owner when away from his territory.

Out in the field, when patrolling his territory, the Great Pyrenees livestock guardian may be working alone for long periods of time, making his own decisions, and acting to ward off danger. Therefore, training the Great Pyrenees takes patience and skill, as the dog tends to be both dominant and independent, preferring to do only what makes sense to him. Short, positive training sessions work best, and owners must learn to establish alpha pack position. It is very important to socialize and train this large protective dog properly to ensure good citizenship.

Because aggression against predators such as wolves was his job for centuries, the Great Pyrenees tends to be quite dog-aggressive. Same-sex dogs, even those living in the same household, may be a danger to each other and may have to be kept separated.

Books about the Great Pyrenees