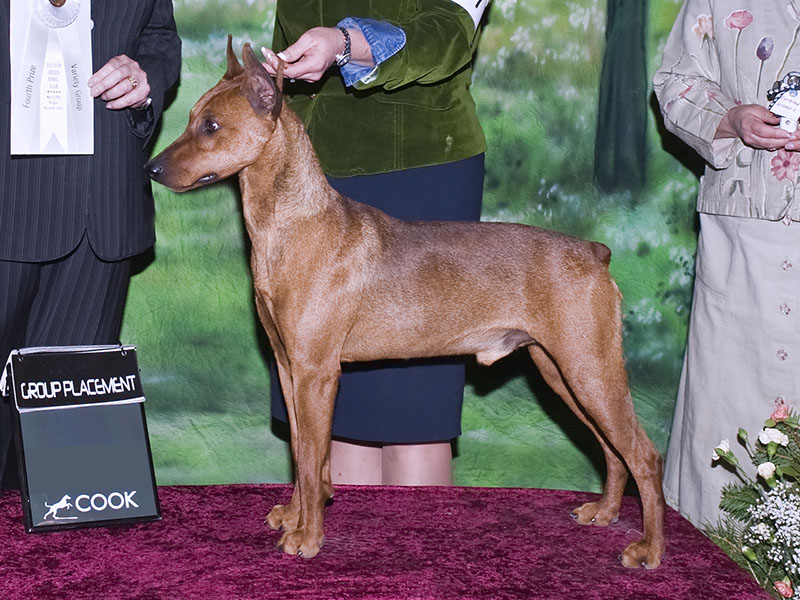 Though fairly new to North America, the German Pinscher (sometimes called the Standard Pinscher outside the U.S.) has been an officially recognized breed in Germany since the late 1800s and has been known and used as a ratter and vermin hunter in that country for centuries. Some people believe the name “Pinscher” derives from the word “pinch,” and refers to the way the dogs caught rats with their paws.

The German Pinscher is closely related to the Standard Schnauzer. At one time, the Schnauzer was the rough-coated variety and the Pinscher the smooth-coated, and pups with both types of coats appeared in the same litters. Eventually the wirehaired and smooth-coated types were separated into distinct breeds.

By the time the two world wars were over, the German Pinscher was almost completely extinct. In the 1950s, a German named Werner Jung created a breeding program especially to reconstruct the breed. It is only due to his efforts that we have this beautiful breed today. The German Pinscher was admitted to the AKC Working Group in January 2003.

The German Pinscher is an elegant, compact, medium-sized, squarely built dog, well-muscled and powerful, yet agile, with a smooth, glossy, short coat. The head forms the shape of a blunt wedge from both the front and the side views. The oval eyes are dark and the ears are set high. They may be either cropped or uncropped. If uncropped, they are V-shaped, with a fold, or they might be smaller and erect. The skull has a slight, but distinct, stop, and the nose is black. The teeth should meet in a strong scissors bite. The topline descends slightly from the withers to the back. The back should be short and closely coupled. The tail is held above horizontal when the dog is moving, and, in the United States, is usually docked between the second and third joints. The forelegs are completely vertical, with almost perpendicular pasterns, and the catlike feet are short, round, and compact, with dark pads and nails.

The coat is short and smooth, lying close to the body. Coat colors are solid fawn and red in several shades, including stag red (in which black hairs intermingle with the red), and bicolored black or blues with rich reddish tan markings. Darker shades of red are preferred to lighter ones. The markings are distributed thusly: on the cheeks, lips, and lower jaw; two dots above the eyes; on the throat; as two separated triangles on the chest; on the area between the hock joint and the feet (metatarsus); on the feet; on the inner side of the hind legs; and in the vent area. The toes can have pencil-like markings, though this is not preferred. A few white hairs are OK, but white markings are undesirable.

The German Pinscher retains a very strong prey instinct from early days as a ratter, and will chase anything that moves fast. Be very careful with non-canine pets. Raising them with other pets does not mean that the prey drive is diminished.

This breed is good in most climates; however, in subzero temperatures exposure to the outdoors should be limited to 10 to 15 minutes to avoid frostbite damage to the ears. If it’s cold, the dog may require a coat to go out for walks.

The ears can be either cropped or left natural, depending on the dog organization and personal preference. The German Pinscher is very clean, with almost no doggy odor. OFA and CERF certifications are recommended for all breeding stock to guard against hip dysplasia and eye problems.

The German Pinscher is a sharply vigilant watchdog who will warn you whenever he feels it’s necessary. This may be often; therefore, the breed might not be the best choice for busy apartment complexes. Fearless, courageous, and highly protective of his family and territory, the German Pinscher is not likely to allow people from outside the family to enter the house without supervision. He also can be possessive of his personal belongings, so train the German Pinscher early to relinquish toys and food without protest to avoid problems in this area later. Extensive socialization early in life is the key to a well-adjusted German Pinscher. Not generally recommended for households with children, as the breed is very protective and tends to bite; however, can be OK with well-trained, respectful children. Best in a one-dog home, but can do well with other (especially larger) dogs in a household if raised with them from puppyhood. Mature dogs of the same sex might be quite aggressive with each other and should not generally be run or left together.

Vivacious, highly intelligent, and potentially willing learners, German Pinschers also can be quite strong-willed, manipulative, and stubborn. This breed requires a firm, dominant, consistent owner, but is very sensitive and should not be treated harshly. He bonds strongly with his master and thrives on affection and attention, but on his own terms. Obedience training for the German Pinscher is highly recommended as a way to establish positive leadership, with you in command instead of him. The German Pinscher is also an excellent agility dog as he is fast and agile.

Books about the German Pinscher