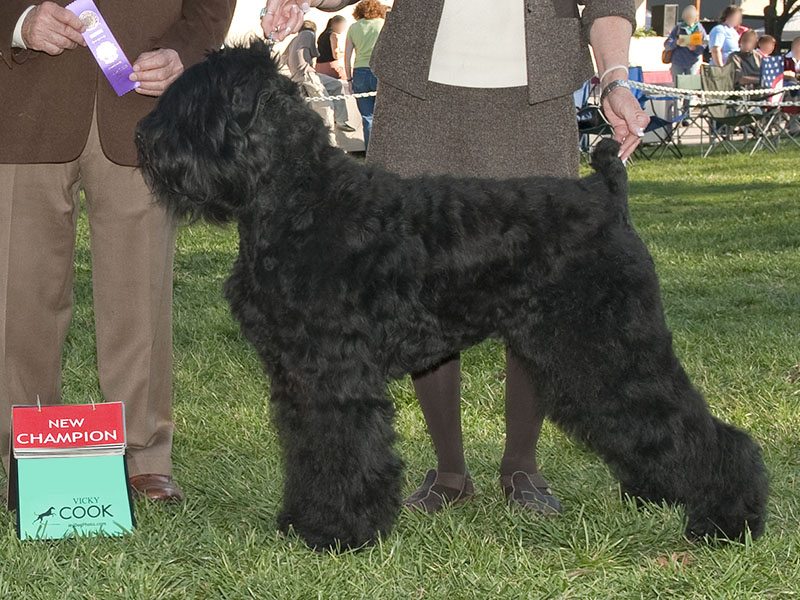 The Black Russian Terrier was developed starting in the 1950s by the Russian military. The goal was to create a “super man-stopper” that was also loyal and hardy enough to withstand the extremes of Russian winters. Giant Schnauzer-Airedale crosses were selectively bred with Airedale-Rottweiler crosses and Giant Schnauzer-Rottweiler crosses. A total of about 17 breeds were mixed in. In 1957, the new breed was exhibited at a large all-Russian dog show, and private breeders’ interest was kindled. Political conditions allowed the military to sell dogs to private parties, and this new group of breeders then focused on developing traits that helped the BRT become a member of society: temperament, intelligence, loyalty, and trainability. Finally, in the 1960s and 1970s, the last combinations of other breeds were made. Today, with proper socialization and training, the BRT can be an excellent family guard dog. The FCI standard for the Black Russian Terrier was written in 1983, and the breed was first exhibited in the United States in 1991. The BRT was admitted to the Working Group of the AKC in 2004.

The Black Russian Terrier is a very large, heavy-boned, muscular black dog with a tousled double coat all over his body. The broad, blocky head, viewed from the side, has two parallel planes with a marked stop. The muzzle is a little shorter than the skull in a 4:5 ratio. The ears are small, high-set, and triangular, folding to lie close to the cheek. The nose is large and black, and the teeth meet in a scissors bite. Lips are black, with no flews. The gums are dark and the tongue might have a black mark. The neck should be thick and powerful, without a large dewlap. The withers slope down into the level back. The high-set tail is docked, leaving three to five vertebrae. The forequarters and hindquarters are muscular, and the legs are straight. Rear dewclaws must be removed.

The tousled double coat consists of a coarse outer coat (1.5 to 4 in) and a soft, thick undercoat. Trimming of the coat is quite complex. Color should always be black, or black with a few gray hairs. The gait should be easygoing, springy, and smooth. Males should appear masculine, and females should appear feminine, though still substantial.

Black Russian Terriers have adapted well to apartment living with sufficient exercise. More and more of these dogs are available in the United States. Be very careful to get multiple references or contact a national breed club before buying a dog because some unscrupulous dealers have sold dogs with false papers. It can sometimes take several years on a waiting list to get a high quality Black Russian Terrier puppy. The Black Russian Terrier sheds more lightly than average, but a bit more than some terriers. This breed needs at least weekly grooming plus professional grooming a few times a year. It can help for pet owners to have a professional do the first few groomings to set the correct pattern on the dog. Show grooming can take as much as six hours. Like many large breeds, the Black Russian Terrier has a tendency to hip and elbow dysplasia (be sure both parents have OFA, PennHIP, or another national clearances). Unfortunately, very few dogs in Russia have their hips x-rayed, and none have their elbows x-rayed. Keep the growth rate slow during the first months of life to lessen or prevent this crippling condition. Wait one and a half to two years for sports such as agility or jogging to allow bones to develop without stress.

Very courageous, self-confident, calm, and stable. A highly intelligent thinker who learns because he wants to please and because the work is interesting. Keenly observant. Can be stubborn, but does not respond well to force. Requires training or can become dominant and insistent. Slow to mature; the protective instinct appears at the age of one and a half to two years, and from that point on, the dog will protect family, home, and possessions. Will try to take care of his owner both physically and with emotional support. This excellent guardian will warn you of the approach of any stranger. Will take cues about how to behave toward particular strangers from the way the owner acts toward them, but will remain always watchful when strangers are present, no matter how many times the person comes to the house. The Black Russian Terrier might try to protect your children from their friends; never leave a Black Russian Terrier unsupervised with children. Also might try to herd children. Black Russian Terriers are good as farm guards because they are watchful, tend to stay within their territory, and are gentle with farm animals. They are different than many guard dogs in that they need to be with their families. This is not a kennel dog. If left alone too much, the Black Russian Terrier can become aggressive. This breed’s temperament has softened over the last 15 years, so they are becoming more comfortable with children than they once were. Extensive socialization is the key to a well-adjusted Black Russian Terrier. Socialize early and thoroughly with other dogs and people; otherwise, this breed might not tolerate handling by anyone outside the family. Though not usually the one to pick a fight when out walking, male same-sex and dominance aggression has been reported, in or out of the same household.

Books about the Black Russian Terrier