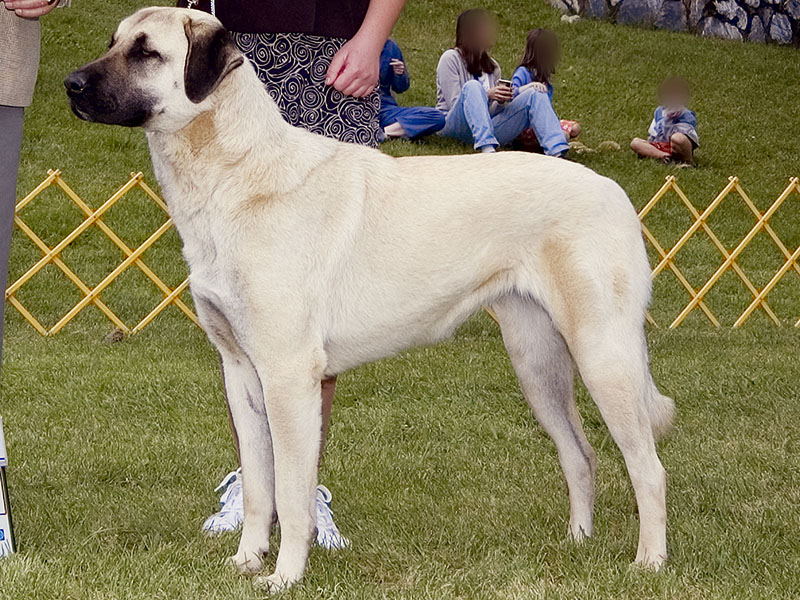 The Anatolian Shepherd Dog is a large, majestic, and powerful—but not massive—livestock guardian. He is capable of great speed, endurance, and agility. The head is large, but in good proportion with the rest of the body. The skull is wide and slightly rounded, with a slight stop. The rectangular muzzle should be a bit shorter than the skull, with a blunt profile. The lips are edged in black, and hang down slightly, but the upper lip should not hang down lower than the bottom jaw’s lower edge. The teeth should meet in a scissors bite. The V-shaped ears are pendant, rather small, and have rounded tips. In Turkey, the ears are often cropped very short. The small, deep-set eyes range from gold to brown in color. Nose and eye rims must be either black or brown. The thick, muscular neck has a slight dewlap. The topline is mainly level, though slightly rounded at the loin. The back is short relative to leg length. The chest reaches to the elbows. The front legs are straight and set well apart. The tail is set high and reaches to the hock. When the dog is alert, the tail is carried curled over the back; otherwise, it hangs low with a slight upward curl. The double coat is generally fawn with a black mask, though any color is acceptable. Other frequently seen colors include pinto, white, and brindle. Coat length might vary greatly depending on the season and the dog’s lineage. There are two basic coat types: short (1-in. minimum) and rough (about 3 in.). There might be some feathering on the ears, legs, and tail. All coats have a thick undercoat.

Anatolian Shepherd Dogs mature quite slowly, reaching full adulthood at approximately 4 years of age. Hip dysplasia is not a serious problem in the Anatolian Shepherd, though responsible breeders should still x-ray all breeding stock as a precaution. Anatolian Shepherd Dogs are sensitive to anesthesia. Young Anatolians should be given extra vaccinations against parvovirus, as their immunity often takes longer to develop than with many other breeds. Some lines are prone to eyelid entropion or to hypothyroidism. Ear infections are fairly common. Some Anatolians tend to bark at night. Some like to dig. Anatolian Shepherds tend to be pretty mellow with children; however, because they are quite large, they can accidentally knock children over during play. Proper training of both dog and child is the key to success. The Anatolian Shepherd Dog does not drool, unlike many other giant breeds.

Very loyal, alert, and possessive. Calm, steadfast, and brave, but not aggressive. Independent, proud, and self-assured. Affectionate with his own family, but suspicious of strangers, especially after reaching adulthood. Strangers should be formally introduced before the mature dog is asked to accept any familiarities. The Anatolian Shepherd Dog will not allow anyone onto the family property if the owner is not home, unless he has had frequent contact with the person, but he is fairly friendly with those people the family accepts. He enjoys well-behaved children, especially if raised with them from puppyhood, but should always be supervised and properly introduced. May be protective of the family children. Extensive early socialization, obedience training, and consistent dominant leadership are essential for this breed. Because of his independent temperament, the Anatolian Shepherd responds best to motivational training methods. This dog has his own ideas and will not cater to the owner’s every whim. The Anatolian Shepherd Dog has strong protective instincts and will guard and protect without any additional “protection” training. Protective instincts grow as the dog matures, often coming suddenly to the fore at around 1-1/2 years of age.

Books about the Anatolian Shepherd Dog