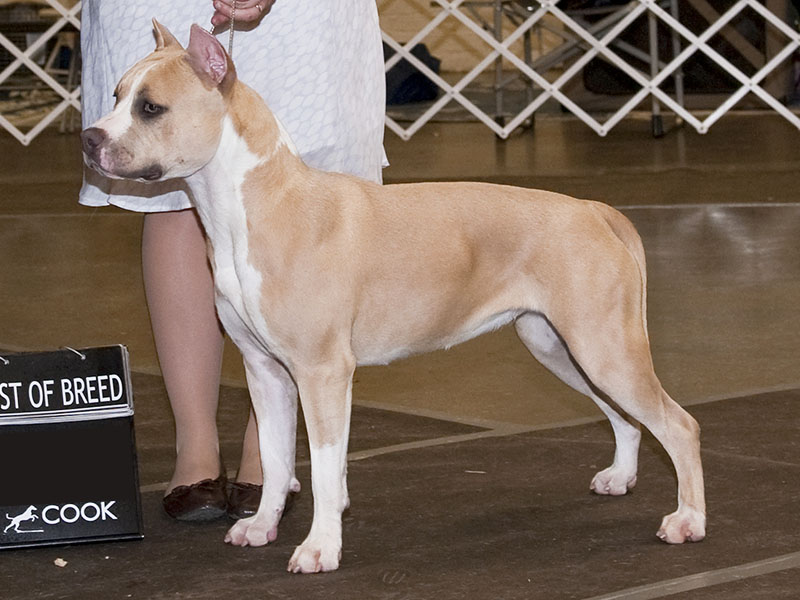 Several types of dogs are currently called “pit bulls” in the United States: the American Staffordshire Terrier, the Staffordshire Bull Terrier, and the American Pit Bull Terrier. Ancestors of today’s “pit bulls” were developed in late eighteenth and early nineteenth century England from ancient Mastiff stock. These early bulldogs were used for hunting difficult game such as wild boar, and as catch dogs for farmers and butchers. The dogs would catch hogs by the ear and bulls by the nose until their master could get a rope around the animal. These dogs also were used in displays of bullbaiting. The name “bulldog” might have come from the dog’s use on bulls, but it also might have originally been “bold dog” because the breed was unafraid of such formidable animals as bears and bulls. Early artwork reveals that today’s American Pit Bull Terrier looks a lot like the original bulldog, so it very well may be a direct descendant, with little in the way of crosses to other breeds. However, the exact mixes that went into what we know as the pit-bull breeds today are shrouded in mystery; owners of fighting dogs were so competitive with each other that they did not divulge their breeding secrets.

Though the American Pit Bull Terrier has received a great deal of negative publicity, this is mostly due to unscrupulous breeders who have encouraged aggressive characteristics in the breed. This athletic, versatile, affectionate breed can be an excellent working dog and family companion when given the right socialization, handling, and training. His working abilities and athleticism also help him excel at many sports, including obedience, agility, and weight pulling.

The American Pit Bull Terrier is athletic, strong, and agile with a deep chest and a squarely built, sturdy body. The medium-length head has a flat skull with prominent cheek muscles, and a broad, square, or slightly tapering muzzle with powerful jaws. The high-set ears might be cropped or uncropped. The eyes are round, set low and far apart. The eyes and nose can be any color. The back is short, a bit higher at the withers and slightly arched at the loin, but the body is slightly longer than tall. The tapering tail is rather short and low-set. It should never be carried over the back, and it should never be docked or bobbed. The coat is short. All colors and color combinations are permissible except for merle. The standard for the American Pit Bull Terrier is looser than for many other breeds, as this dog was bred for working and fighting ability and not for his looks. For example, some smaller dogs may be 35 lbs. while some weight pulling competitors weigh up to 95 lbs. Dogs should be well proportioned for their size and should move with a springy gait.

This breed requires a lot of exercise. Choose another breed if you do not have the time to exercise your dog thoroughly and regularly, or consider getting your dog a treadmill or spring pole (a solo tug-of-war machine). Serious use of a treadmill should begin only at a year and a half or later so it doesn’t interfere with bone formation. The American Pit Bull Terrier does well in most climates with appropriate shelter. Protect from cold weather because of his short coat, and watch out for overexertion in hot weather. American Pit Bull Terriers like to dig and jump, and are known as escape artists, so they might require a more secure environment than many other breeds. Speak with a knowledgeable breeder about what works best. American Pit Bull Terriers are generally quite hardy, but some lines are prone to demodectic mange, a skin disease that may or may not be controllable. In addition, a serious hereditary disease called Cerebellar Ataxia affects some American Pit Bull Terriers. Cerebellar Ataxia causes degeneration of the central nervous system, and symptoms generally do not appear until dogs have reached 3 years old or more, making this a vital concern for people purchasing a puppy. If a puppy inherits the gene for this disease from both parents, he or she will have the disease. If the puppy inherits the gene from only one parent, the pup is called a “carrier” and can appear completely healthy, but can pass on the disease to offspring. Thankfully, there is now a DNA test available to identify carriers so they can be removed from breeding programs. For more details about this test and Cerebellar Ataxia, please visit: http://www.optigen.com/opt9_cerebellarataxia_amstaff.html. Ask breeders whether they have tested their breeding stock for Cerebellar Ataxia. Be sure to check local ordinances—some municipalities have laws regulating ownership of this breed. For example, some require a muzzle when the dog is out in public. Some insurance companies may not provide liability coverage for pit bull breeds.

Alert and outgoing. Spirited. Very loyal. Intelligent, trainable, eager, and willing to please, but needs a firm and consistent owner. Requires a lot of interaction with his human family — do not get this breed unless you want a real companion. Does best as a house dog, as part of the family. Has a strong affinity for children, though, as with all breeds, children should be supervised and trained how to treat dogs properly. Though American Pit Bull Terriers tend to be friendly with strangers, and therefore are not good guard dogs, they will lay down their lives for their families if needed. The breed is renowned for its gameness, unflagging courage, and sustained determination.

The early American Pit Bull Terrier was specifically bred to combat other dogs, so many adults of the breed have a strong tendency to dog aggression, particularly if challenged by another dog. It is crucial to socialize puppies well and early with other inoculated dogs and puppies to minimize problems in this area, but even with the best of training and socialization, some individuals of this breed will turn on other dogs once they reach adulthood. American Pit Bull Terrier owners should be aware that eventually their pets might need to be isolated from other dogs. The best way to avoid problems is to socialize thoroughly, keep the adult American Pit Bull Terrier on a leash and under control at all times in public, and avoid situations where a confrontation is possible. Dog parks are not generally advisable. Many American Pit Bull Terrier owners carry and learn how to use a “breaking stick,” which allows them to safely pull apart dogs that are fighting. The American Pit Bull Terrier was bred to be extremely insensitive to pain (a trait which helped make him such a successful fighter), so it is advisable to use a pinch collar to get the dog’s attention, rather than trying to use a choke collar. The choke collar can damage his throat.

To ensure that dogs were approachable in the middle of pit fights, even when badly injured or emotionally excited, the early American Pit Bull Terrier was specifically bred to be willing, responsive, and gentle to humans. In the pit fighting world, dogs who displayed aggression to humans were immediately shot. There were very few incidents of human aggression in the breed prior to the 1970s. However, unscrupulous breeders over the last few decades have encouraged aggression toward humans, leading to the tragic stories about pit bulls that pepper the news today. If you’re looking for an excellent family dog and companion, be sure to buy your American Pit Bull Terrier puppy from a highly reputable breeder, then socialize and train the dog properly and thoroughly. If you have any problems with aggression with your American Pit Bull Terrier, immediately consult a professional trainer who specializes in this breed.