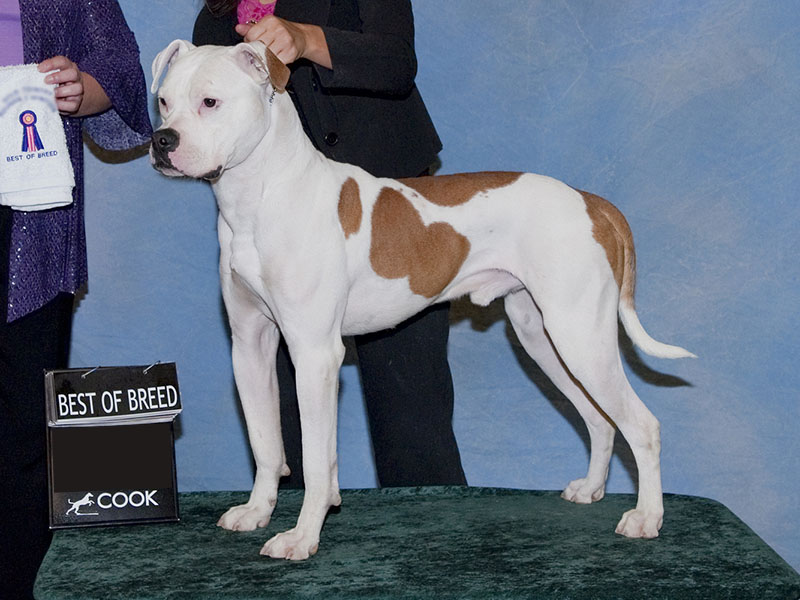 Early bulldogs were used in the bloody sport of bullbaiting. Some of these dogs emigrated with their masters from England to America. Eventually the English Bulldog was bred down in size and his personality was softened, but the American version remained a larger, fiercer dog. The American version has longer legs and more speed and agility than the English show dog. After World War II, two men made an effort to preserve and re-establish the breed as working bulldogs in the Sand Valley area of Alabama where farmers used these dogs to help handle unruly livestock. By 1970, the dogs were a distinct breed, and in 1999, the United Kennel recognized the breed as the American Bulldog. The American Bulldog has also been used as a guard and in hunting bear, wild boar, squirrel, and raccoon. They have even been trained to drive cattle and guard stock from predators. Farmers prize the dogs for their stamina, protectiveness, intelligence, and working abilities.

The American Bulldog is a muscular, sturdy dog with a large, powerful head and jaws. He is very strong, but agile and light on his feet. The chest is wide and the muscular neck tapers from shoulders to head. The neck might have a slight dewlap. The head is square and broad, with muscular cheeks and a furrow between the rounded eyes. The strong muzzle is shaped like a box. The stop is sharply defined and deep. The teeth should meet in a tight undershot, even or scissors bite. A variety of ear types are accepted, including rose, half pricked, and pendant. Though some people crop the ears, uncropped ears are preferred in the American Bulldog Breeders Association and in the United Kennel Club standards. Any eye color is permitted, but black eye rims are preferred on white dogs. Black nose color is preferred, but red or brown are acceptable. In black-nosed dogs, the lips should also be black, though some pink is permitted. The heavy-boned front legs should be strong and very straight. The hindquarters should be very broad and muscular. The low-set tail begins thick at the base and then tapers to a point. The short, harsh coat comes in combinations of red, brindle, white, and fawn, with any color acceptable except solid black, solid blue, merle, or tricolor (white with patches of black and tan). A full black mask is also unacceptable.

Brave and determined, but not hostile. Alert and self-confident. Might be assertive with other dogs and aloof with strangers. Because of his strong protective instincts, the American Bulldog should be well-socialized and obedience trained at an early age.

Books about the American Bulldog