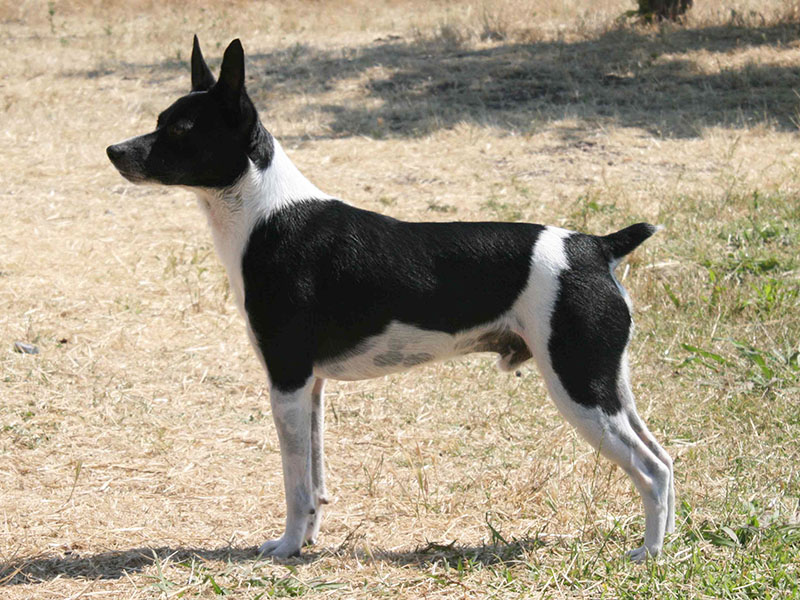 A cross between Fox Terriers and various other European terriers (including the Old English White Terrier, the Bull Terrier, and the Manchester Terrier), the Rat Terrier was originally bred by immigrants in the 19th century to hunt rats and other small vermin (both above and below ground). By the 1910s and 1920s, the Rat Terrier had become one of the most popular farm dogs in the United States. During the 1930s dust-bowl era, farmers in the Midwest bred these small, enthusiastic terriers to whippets and Italian greyhounds to make them even faster and more versatile in catching jackrabbits that plagued their fields and crops.

At the same time, breeders in Central and Southern states began breeding their Rat Terriers to Beagles to create stronger prey and pack drives. Eventually, all these lines came together in the sturdy, fast, hot-nosed Rat Terrier popular with families, hunters, and farmers today. The Rat Terrier became a member of the AKC Terrier Group on June 26, 2013.

The Rat Terrier’s head has a smooth wedge shape that widens toward the base of the ears. The expression is intelligent and alert and the oval eyes, while not large, are wide set. Eye color varies from dark brown to hazel, with gray eyes being acceptable only in blue or blue-fawn dogs. The ears are set on the outer top of the skull, but they can be erect, semi-erect, and tipped, or semi-erect with a button (the ears fold forward). The nose color matches the body color and should be solidly pigmented. The lower jaw and teeth should be strong and well developed with no sign of being snipey or weak.

The neck is strong and arched along the crest; the topline is smooth and firm with a very slight arch at the croup. The body is strong and flexible with well-sprung ribs that extend to the elbow. The tail extends directly from the spine. It can either be carried slightly below the horizontal or almost erect, depending on the dog’s attitude.

The shoulder blades have flat muscles; the elbows fall directly under the highest point of the shoulder blade. The forelegs are straight and the feet are oval and moderately arched. The hindquarters are muscular; the stifles are well-bent with short hocks that are parallel and perpendicular to the ground. The front legs from the ground to the elbow should be approximately the same from the elbow to the withers or top of shoulder blades. (Short legs are seriously faulted in the AKC, and are registered as Teddy Roosevelt Terriers with the UKC as a separate breed.)

The coat is short, close, smooth, and shiny. All facial markings are acceptable, and most colors are acceptable (including black, chocolate, red, apricot, blue, fawn, tan, lemon, and white), as long as they’re in a pied pattern, with large patches of one or more colors with white. Tan points are common and are acceptable, as are badger markings (a mostly tan face that becomes darker on the back and top of the skull), but heavy ticking (small spots found on the white parts of the dog’s coat) is not desirable. All dogs must have a patch or strip of white on the chest or body.

The Rat Terrier’s gait should be efficient and agile, with good reach and drive.

Tails either can be docked or not docked, although it is customary to dock them. Dewclaws are usually removed. Rat Terriers are prone to allergies, chemical sensitivities, and demodex mange. They often have crooked or incorrect bites. Dogs born without a coat are AKC disqualified and should be registered as American Hairless Terriers with the UKC.

Although technically a terrier, the cross breeding with sight hounds (such as the Italian Greyhound) and scent hounds (such as the Beagle) has helped the Rat Terrier develop a more even and affectionate temperament than many other terrier breeds. They also tend not to be as yappy as other terrier breeds, although some of them “talk” a lot by mumbling and grumbling. But that doesn’t mean they aren’t demanding. When feeling ignored or lonely, rat terriers can dig at people with their paws and experience separation anxiety. Breeders note that because these dogs are small, cute, and personable, it is also easy to spoil them, which can result in a demanding or clingy dog.

These energetic little dogs are easy to train and easy to command, as they are both super intelligent and super eager to please. Because of this, they excel at a lot of canine activities, including tricks, obedience, agility, hunting, lure coursing, tracking, search and rescue, and even weight-pulling contests and terrier races.

Although these little dogs can be a little reserved with strangers, once they know you, they love you. The Rat Terrier is generally good around children, but should be supervised, especially if they weren’t raised with children. These dogs also aren’t good candidates for living in a kennel, as they like to be around people.

Unlike many terrier breeds, Rat Terriers are generally friendly with other dogs. But as instinctive hunters, their prey drive can be triggered by small animals like cats, rabbits, and pet rodents. For Rat Terriers to get along with other pets, the best case scenario is to raise them together, so that the terriers learn to see the other pets as part of the family and want to defend them as such.

Books about the Rat Terrier