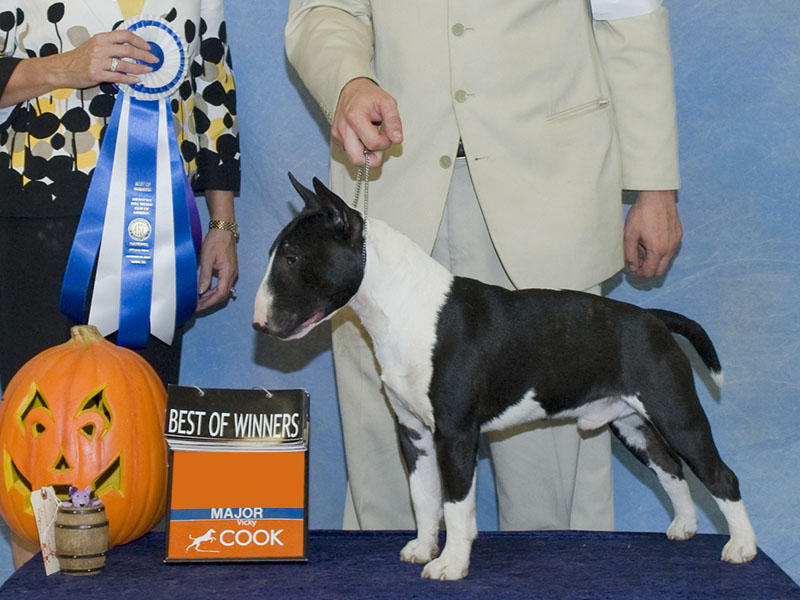 Smart, cheerful, fearless, and typically referred to as a clown, the Miniature Bull Terrier is basically a smaller version of the standard Bull Terrier. In fact, the mini bull is a great dog for those who admire the standard “bully” but can’t handle the size (typically up to 80 lbs.) and dominance of the larger breed. The mini has been around almost as long as the standard Bull Terrier (that is, since the late 1800s); it was created by pulling smaller pups from standard bull litters and then breeding them to create a whole line of mini-sized “bullies.” The smaller dogs, however, suffered from a number of faults and, due to lack of standardization, fell in and out of favor in both British and American show rings. In the 1960s U.S. breeders imported Miniature Bull Terriers from England. Stateside fanciers gained Miscellaneous Class status from the AKC. Still, the small gene pool continued to restrict breed improvement. It was not until greater numbers of minis were imported from both England and Australia in the early to mid 1980s that the breed began to reach the standardization required. The AKC admitted the breed to the Terrier Group in 1991.

The Miniature Bull Terrier looks just like a standard Bull Terrier, with the same squarish, muscular build, short, flat coat, and long, strong head. Indeed, the mini bull is considered a “head” breed, in that its deep, egg-shaped head is its distinguishing feature. There is no stop where the nose departs from the brow, so the animal has what looks like a Roman nose arcing gently down in one long, undifferentiated line. The eyes should be triangular and well-sunken, and have a keen and intelligent look. The nose should be black, and the teeth should meet in a scissors bite.

The neck should be muscular and long. The back is short and strong, but arches up over the loin. The underline curves gracefully upwards. The chest looks broad from the front, but is not as broad as a bulldog’s. The short tail should be carried horizontally and should taper to a fine point. The typical gait is smooth and easy, even a bit jaunty. Coat colors are white (with or without head markings), fawn, brindle, and red.

Due to the small number of Miniature Bull Terriers available, the breed as a whole suffers from some genetic maladies, especially heart defects (predominantly valve problems) and lens luxation.The eyes, hearing, heart, thyroid, and kidney function of the parents should be tested just prior to breeding. (These tests are generally only predictive of health problems in the offspring after the bitch or sire is 2 years old, so many breeders are waiting until their dogs are 2 or even 3 years old before breeding them.) Yearly exams of all these systems can help detect and possibly forestall expensive and painful health problems. Lens luxation and glaucoma, for instance, can often be prevented with the use of medications if they are discovered prior to clinical symptoms. A DNA test is available for lens luxation.Pet mini bulls don’t need much grooming, but owners of show dogs typically trim their whiskers. Many owners remove the dewclaws, too, because the dogs are so active that the claws can get torn. These dogs tend to be expensive (up to $2,500 per puppy), as breeding entails both artificial insemination and Caesarean sections. The litters also tend to be small, and the mothering instincts of some females are tenuous, so the puppies may require human assistance, or at least human presence for the first few weeks.

The Miniature Bull Terrier packs a big punch for a small breed. He is strong, intelligent, and courageous, and makes a good watchdog. (Breeders joke that a mini bull might let a burglar in, especially if he had a cookie, but he wouldn’t get out again.) The AKC standard calls for a dog that is “amenable to discipline” and of “even temperament,” but these dogs can be hard to train because they don’t see the point of repetitive tasks. Toys, hikes, obedience training, agility work, therapy work, and ball play all help keep the active mini bull busy, happy, and out of trouble, but crate training is still essential for times when you’re not around to supervise. Miniature Bull Terriers, like their standard cousins, are also known for “bully runs,” when they suddenly sit up, tuck their tails, and take off across the room or yard at a full gallop. This is entertaining to watch and, fortunately for those who prefer a more peaceful environment, usually only lasts a minute or so. Above all, the mini bull is a great lover of humans and a clownish soul; this breed mostly wants to spend time—and fool around with—his humans.

Any handler of a Miniature Bull Terrier needs to be capable of taking a leadership role, as the dog is prone to challenging authority, especially as an adolescent. Care must also be taken with a mini bull if you have other pets. Due to the standard Bull Terrier’s history as a fighting and hunting dog, mini bulls can be aggressive.

Books about the Miniature Bull Terrier