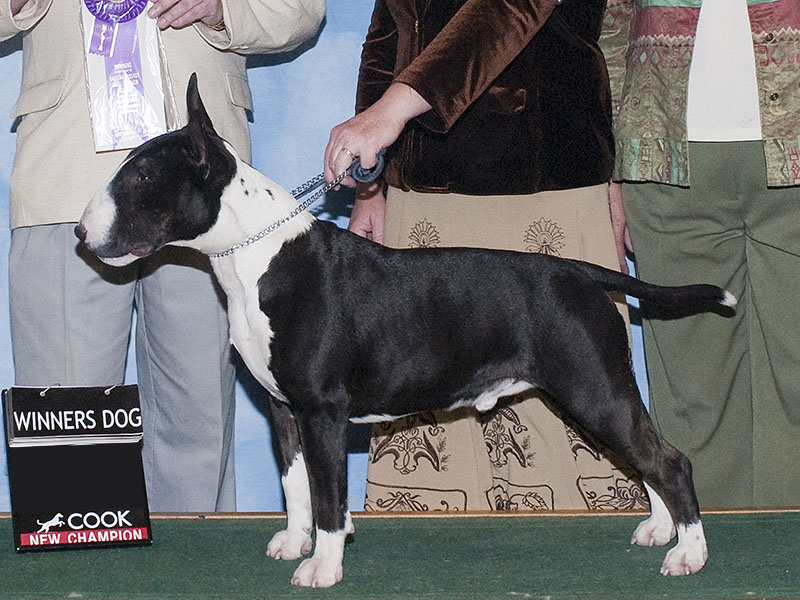 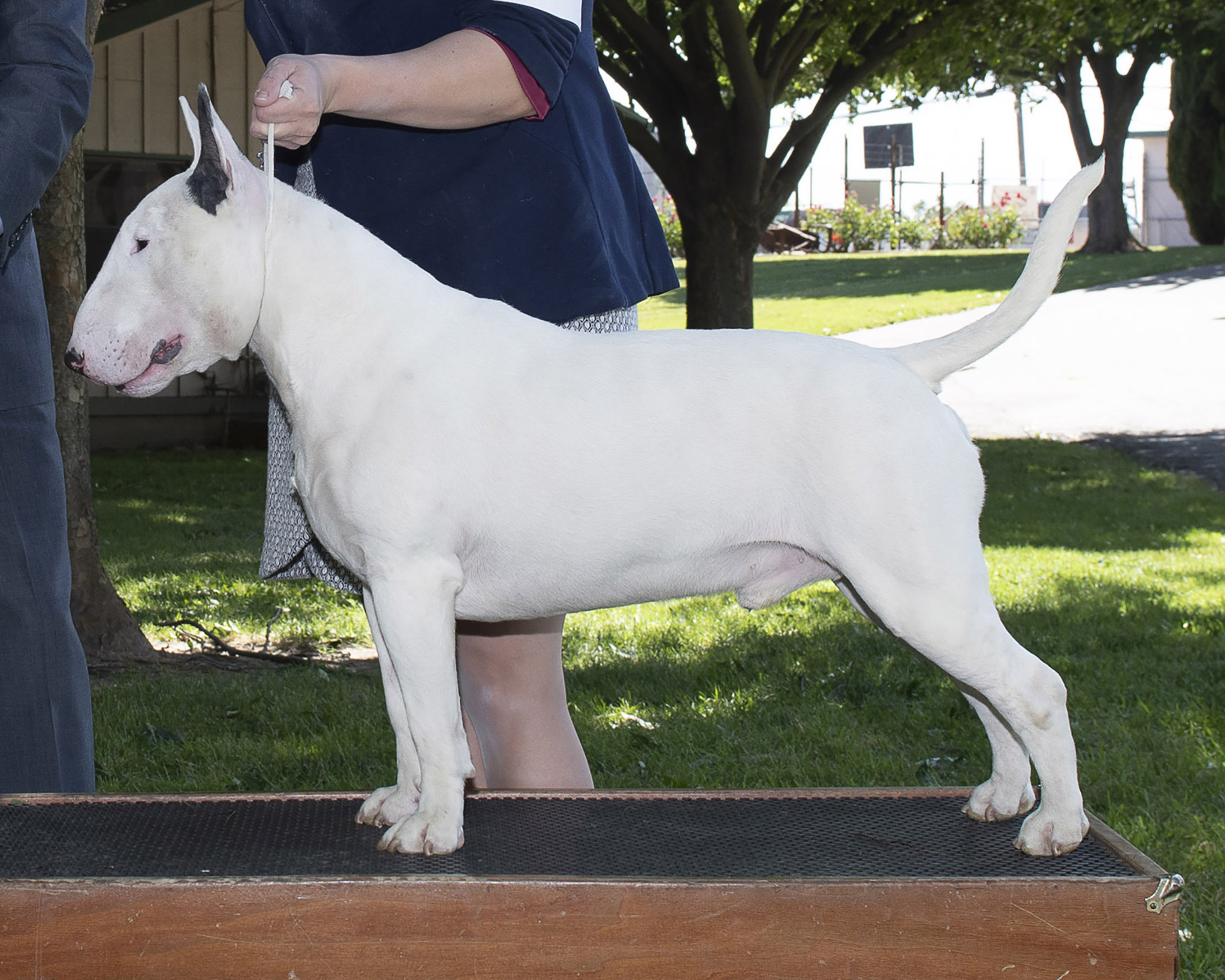 The Bull Terrier was developed from crosses between bulldogs and terriers in the nineteenth century. The dog’s strength, agility, and courage made it popular as a gentleman’s fighting dog; some advocates of the breed, however, say that this is a myth. What we do know for sure is that the White Bull Terrier variety (nicknamed the “White Cavalier”) became especially fashionable as a pet for the aristocracy in the late nineteenth century. Today, Bull Terriers are still loved for their courage, loyalty, intelligence, affectionate spirits, and clownish sense of humor.

The Bull Terrier is a sturdy, medium-sized dog, big-boned but not coarse, with an oval-shaped head with no stop. The eyes are small, piercing, and triangular; ears are natural, small, and erect. The body is compact and muscular with a short back. The tail is naturally fairly short, tapering to a fine point and carried horizontally. The overall appearance is distinctive and unforgettable. Two varieties are accepted in the AKC standard: the White Bull Terrier and the Colored Bull Terrier. The White Bull Terrier might have colored markings on the head, but not elsewhere on the body. Colored Bull Terriers may be brindle, black-brindle, tricolor, red, or fawn with white markings.

The Bull Terrier can be a wonderful pet if thoroughly socialized and trained with a firm hand, but the breed is not recommended for people who don’t have the time for these important activities. Can be too energetic for small children, so supervision is required; some Bull Terriers who are wonderful pets to the children in their own family might be aggressive to other children and many Bull Terriers dislike being teased and might bite in response. Highly motivated by food or toys, Bull Terriers respond well to firm training with positive reinforcement and a sense of fun. Avoid overly repetitive or punitive training techniques. Crate training is recommended to keep the Bull Terrier safe and out of trouble when you cannot watch him. Requires a moderate amount of exercise. Can be very destructive (chewing and digging) if not given lots of toys, attention, and other diversions. Check puppies for deafness. Can be sensitive to fleas or other parasites. Other health issues to ask breeders about include heart defects, kidney failure, luxating patella (dislocation of the kneecap), and skin allergies.

Long ago this breed may have been a gladiator, but he is now much more companionable. Courageous, strong willed, fun loving, active, and clownish. Fearless. Becomes very attached to his owners. Bull Terriers’ feelings can be easily hurt. A well-bred and well-socialized Bull Terrier should not generally be aggressive with other dogs. If provoked, however, a Bull Terrier might not back down from a fight. Unaltered males often don’t get along with other intact male dogs. All Bull Terriers should be leashed unless there are no people or animals in the near vicinity. Male and female can live together happily and two females can sometimes live together with care and supervision. It’s not recommended that Bull Terriers live with any dominant, aggressive, or assertive pets. The Bull Terrier also might be aggressive toward smaller animals, including cats, rodents, birds, and smaller dogs, due to the breed’s strong prey drive.

Bull Terriers can be protective and willful; do not encourage this breed to be possessive or jealous. They may try to join in family roughhousing or quarrels, which could result in nipping or knocking down. The Bull Terrier should be thoroughly socialized so that he feels comfortable with strangers and other dogs. Be sure to also teach a Bull Terrier not to nip and bite; with his strong jaws, he can do real damage even if he thinks he’s only playing. Bull Terriers shouldn’t be left alone for a long time; they become bored, lonely, and destructive, and they also might develop personality quirks such as incessant barking and tail chasing. Some Bull Terriers suffer from obsessive-compulsive behavior, often involving tail chasing, which might require medical treatment. Always purchase a Bull Terrier from a reputable breeder who takes care to breed for temperament. Different lines can have different personality traits; for example, some lines can be significantly more dominant than others.

Books about the Bull Terrier