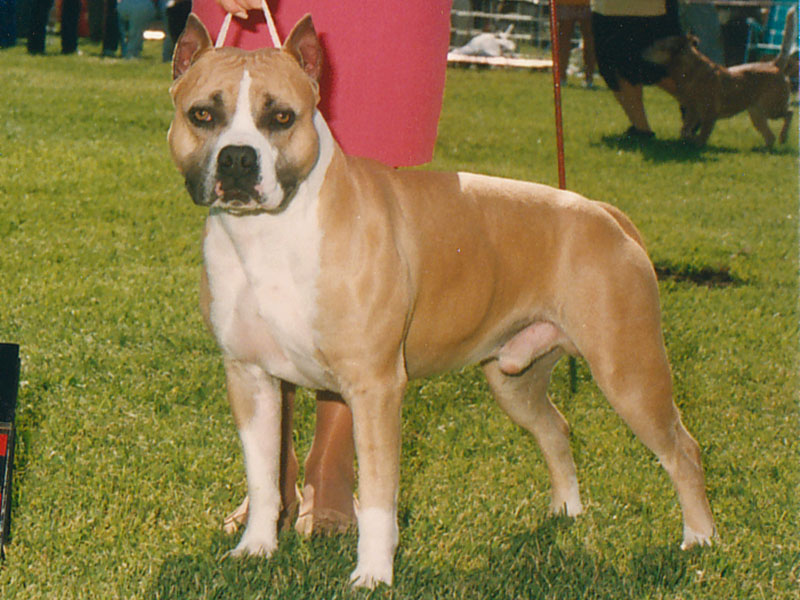 The roots of the American Staffordshire Terrier can be traced through early Mastiff warriors to the original bulldogs in England, which were used in the bloody sport of bullbaiting. As bear and bullbaiting declined in popularity, interest in dog fighting increased. Breeders wanted to create more agile fighting dogs for this sport, so they crossed their bulldogs with game terriers to create what was then known as the Bull and Terrier Dog, Half and Half, Pit Bull, or Pit Bullterrier. Actual breeding records were closely kept secrets, so much of the Bull and Terrier’s early history is a mystery. The Bull and Terrier later became known as the Staffordshire Bull Terrier in England.

When British settlers came to America, they brought their dogs of various sorts with them, including Bull and Terrier types. These energetic, intelligent animals helped out as general farm dogs, guardians, stock dogs, and even as bear and wild-pig hunters, in addition to continuing their role as pit fighters. In the U.S., the breed has been called Pit Dog, Pit Bull Terrier, American Bull Terrier, Yankee Terrier, and American Pit Bull Terrier. Over the years, the American breed became generally larger and taller than his British cousin, the Staffordshire Bull Terrier. With its great spirit, energy, and affection for their family, the American Staffordshire Terrier has been described as the “All American Dog.”

Today’s American Staffordshire Terrier is primarily a show dog and family companion. His working abilities and athleticism also help him excel at many sports, including obedience, agility, and weight pulling. Because of the breed’s affection for people, some American Staffordshires have become therapy dogs.

The American Staffordshire Terrier is a very muscular, stocky, yet agile dog that is extremely strong for his size. He has a broad, powerful head with highly pronounced cheek muscles and very strong jaws. The ears are generally cropped, though this is optional. Uncropped is preferred in the AKC standard. If the ears are not cropped, they should be either rose or half prick, not pendulous. The eyes are round and dark, and set far apart. Pink eyelids are considered a fault in conformation. The nose is black and the teeth should form a scissors bite. The chest is broad, with straight forelegs, and the topline slopes slightly from the withers to the rump. The relatively short tail tapers to a point and is not docked. The short, sleek coat comes in many colors and color combinations, though all white, more than 80% white, black-and-tan, and liver are discouraged.

A strong, determined, intelligent breed, AmStaffs (as they are often called) like to dig, and also are athletic climbers and jumpers, so they need a more secure environment than some other breeds. Ask responsible breeders for guidance about this. Be sure to check with city and county authorities to see whether there are any regulations regarding ownership of this breed in your area. Also check with your insurance carrier to see if ownership affects your homeowner’s policy. Beware of hip dysplasia; buy only from stock with OFA, PennHIP, or another national hip-dysplasia clearance. Can do well in most climates with adequate shelter. Be aware of possible overexertion in hot weather and of chilling in cold weather.

A serious hereditary disease called Cerebellar Ataxia affects a significant percentage of AmStaffs. Cerebellar Ataxia causes degeneration of the central nervous system, and symptoms generally do not appear until dogs have reached 3 years old or more, making this a vital concern for people purchasing a puppy. If a puppy inherits the gene for this disease from both parents, he or she will have the disease. If the puppy inherits the gene from only one parent, the pup is called a “carrier” and can appear completely healthy, but can pass on the disease to offspring. Thankfully, there is now a DNA test available to identify carriers so they can be removed from breeding programs. For more details about this test and Cerebellar Ataxia, please visit: http://www.optigen.com/opt9_cerebellarataxia_amstaff.html.

Some AmStaff lines may be also prone to heart murmurs, thyroid problems, skin allergies, and tumors. Ask breeders what types of health screening they do and especially whether they have tested their breeding stock for Cerebellar Ataxia.

Very courageous and tenacious. Loving, affectionate, and sensitive. Active and athletic. Devoted and intelligent, and wants to please his master, but can be willful. Requires a firm hand and an owner willing to invest time and energy in positive, patient obedience training. Very people-oriented, the American Staffordshire needs lots of interaction with and attention from his owner. Do not get this breed unless you want to spend lots of time with your dog. An unattended, bored AmStaff might find ways to entertain himself that the owner will not appreciate.

Does best in a one-dog household; if you own more than one dog, never leave them together unsupervised. If you want to get two dogs, the best combination is one male and one female. Though some AmStaffs can be trained to get along with cats and other non-canine pets, they do have a high prey drive, so great care is advised.

The AmStaff is a discriminating, intelligent dog who is loyal and will protect his family. However, the AmStaff is generally friendly with friendly strangers, so though they look tough, this is one of the most often stolen breeds, and is not considered to be a particularly good property guardian.

The pit fighting ancestors of the AmStaff were specifically bred not to bite humans, so their masters could safely handle them even in the midst of a dogfight. Therefore, though American Staffordshire Terriers have a tendency to be dog-aggressive, they are not generally aggressive toward people. Good with children, the AmStaff has a very high tolerance for pain, which allows the dog to tolerate more inadvertently rough handling from children than some other breeds allow. (As with all breeds, children should always be supervised with dogs and should be trained on how to treat them properly.)

Even though selective breeding since the 1930s has led the breed away from its fighting heritage, older pups and adult American Staffordshires still can be very dog-aggressive, and might go after another dog, particularly if challenged. If this happens, it does not bode well for the other dog. Socialize very thoroughly when young to combat aggressive tendencies and be sure to keep the dog completely under control when other dogs are present. The best way to prevent aggression problems is to socialize the dog well and keep the dog out of situations where confrontations are likely. Try never to allow the dog to get into a fight. Dog parks are not generally advisable. Novice owners who are willing to learn to be in charge and to deal responsibly with dog-aggression issues in the breed can succeed with the AmStaff.

Books about the American Staffordshire Terrier