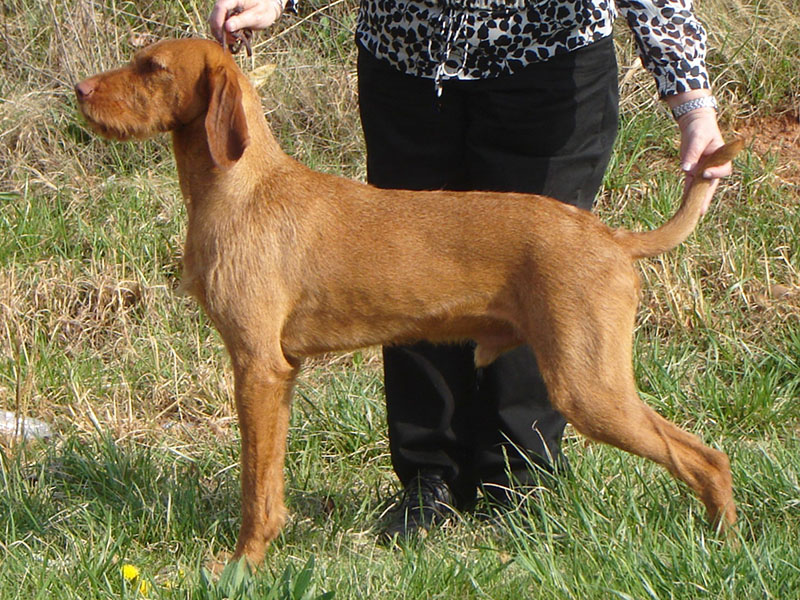 Hungarian hunters and falconers in the 1930s first started developing the Wirehaired Vizsla because they wanted a dog with the hunting abilities of the traditional Vizsla, but with a build and coat that could withstand the extreme weather and terrain in northern Europe. A cross between a Vizsla and a German Wirehaired Pointer, the resultant breed was first recognized by the Federation Cynologique Internationale (FCI) in 1966. Breeders in other parts of Europe, including Germany, France, Sweden, the Czech Republic, Slovakia, and Austria, then began importing the dogs. Americans first imported the Wirehaired Vizsla in the early 1970s. The North American Versatile Hunting Dog Association (NAVHDA) recognized the breed in 1986; the American Kennel Club moved the breed into the Miscellaneous Class on Jan. 1, 2011, and into the Sporting Group in 2014.

Today the Wirehaired Vizsla is a lean, powerful, graceful dog known for its facial furnishings (beard and eyebrows), as well as its excellent nose, its ability to track birds and mammals both on land and in the water, its pointing and retrieving skills, and its gentleness and loyalty as a pet. In Europe and America, the dogs are also popular among falconers.

Slightly larger and heavier-boned than the smooth Vizsla, the Wirehaired Vizsla is a distinct breed, but shares the same noble head, muscular body, and impressive hunting abilities as its predecessor. The head should be lean, and according to the AKC breed standard, the dog’s expression should be “lively and clever,” a look achieved by the breed’s slightly oval eyes, tight-fitting eyelids, and very charming wiry beard and eyebrows. Eye color should be dark; yellow eyes are a fault. The medium-length ears are set at a medium height and hang close to the cheeks. The head has a slight groove running from the back of the skull to the stop (that’s where the muzzle meets the dog’s head), and the muzzle should be blunt. Nose color should blend with the coat color; freckles or age spots on the nose are accepted, but black spots are not. The jaw is strong, and the teeth meet in a scissors bite.

Skin on the neck and body should be tight-fitting. The entire body—including neck, topline, croup, shoulders, and thighs—should be well-muscled; the tail should be set below the level of the croup and tapered toward the end. Tail is carried nearly horizontal, not curled over the back or tucked between the legs. Elbows lay close to the body; dewclaws should be removed from the front legs to prevent injuries in the field, but only dewclaws in the back count as a disqualification. Feet are cat-like; toes are strong and well-arched.

The coat is dense, wiry, and about 1 to 2 in. long—except on the lower legs and underside of the chest and belly, which have shorter, softer hair, and the head and ears, where it is more close-fitting. The front legs should have coat brushes (or slightly longer hair than the front of the leg). Eyebrows have longer hair; the muzzle is enhanced with a 1- to 2-in. harsh beard on both sides.

The coat color should be golden rust, as should the eyes, eye rims, lips, nose, and toenails. The ears can be slightly darker than the rest of the body, and white on the chest, throat, and toes is also allowed, as long as the spot isn’t bigger than 2 inches in diameter.

The gait of the Wirehaired Vizsla should be light, smooth, and graceful.

The tail is usually docked so it is three-quarters its natural size. No trimming, stripping, or clipping needed, except for tidying up. Common health problems include hip dysplasia, eye disease, and cancer. Tends to be OK with cats if raised with them from puppyhood; may not be trustworthy with other pets such as rabbits, hamsters, and birds, as the dog may see these animals as game.

Considered a gentle and sensitive breed, the Wirehaired Vizsla is also an eager and good learner, as well as a loyal — even protective — pet. These dogs need discipline, but don’t handle harsh punishment well due to their sensitive nature. Although bred to be hunting dogs, they make fine pets because of their love of humans and ability to adapt to different environments. Major caveat: they need lots of mental stimulation and physical exercise to keep them happy. That means that if you’re not using them for hunting, they need long walks, hikes, or runs.

Books about the Wirehaired Vizsla