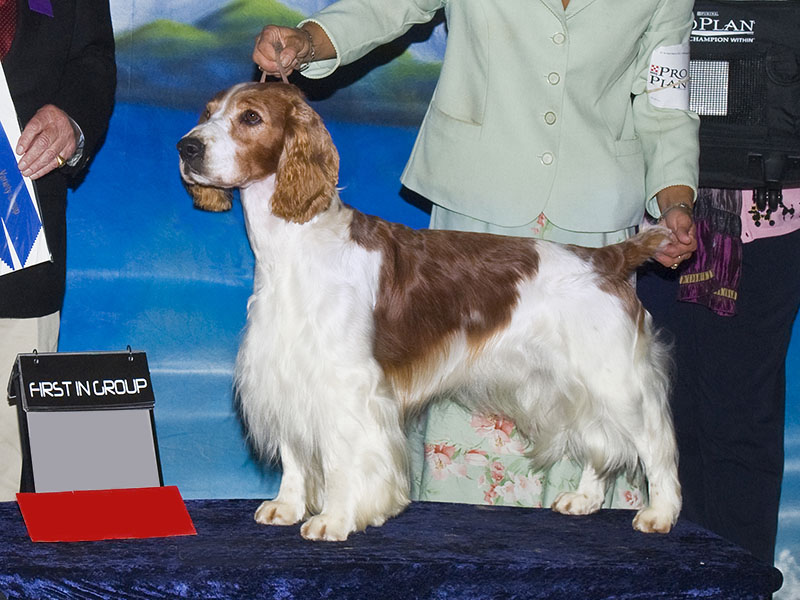 The Welsh Springer Spaniel is an outstanding hardy gun dog developed in Wales, probably before 1300 AD. The early history of the Welsh Springer is similar to that of the English Cocker, English Springer Spaniel, and other spaniels of British origins. All of the early smaller spaniels were called Cockers, or Cocking Spaniels, and larger ones were called Springers—even though they could be from the same litter. Later, spaniels were divided into Water Spaniels and Land Spaniels. Many early writings mention a Welsh Cocker, which might have been the forerunner of today’s Welsh Springer Spaniel. Through the years, more divisions were made. Springers were separated from Cockers. The Welsh and English Springers were initially the same breed, separated only by coat color. They diverged and became separate breeds sometime before 1900. The Welsh Springer has great stamina and can work for hours on end without getting tired in all kinds of weather and on difficult terrain. The name comes from the fact that the breed is talented at finding and “springing” hidden game. His tail starts wagging faster when he discovers game. The jolly disposition of the Welsh Springer makes him a fine companion and family dog.

The Welsh Springer Spaniel is a compact, medium-sized dog with a silky, rich, red and white coat. The hair is straight, flat, and of medium length, with feathering on chest, underside, legs, and tail. The head is slightly rounded, and the muzzle is fairly square. The low-set, somewhat short pendant ears are fringed with hair. The eyes are either hazel or dark colored. The docked tail is carried near horizontal. The feet are round. The Welsh Springer is slightly longer than tall. The breed is a bit smaller and lighter than the English Springer, and a bit taller and larger than the English Cocker Spaniel.

Hip dysplasia is a significant problem in this breed. Buy only from stock with OFA, PennHIP, or another national hip dysplasia clearance. Some lines are subject to epilepsy and entropion. Must be trained to hunt relatively early so he learns not to wander. The Welsh Springer’s coat keeps the dog comfortable in both hot and cold weather. This breed is generally good with other pets, especially if raised with them.

Happy and willing. Less outgoing than the English Springer. Somewhat independent, but also sensitive. Socialize well to avoid timidity. Some may be protective. The Welsh Springer needs to be included in family activities.

Books about the Welsh Springer Spaniel