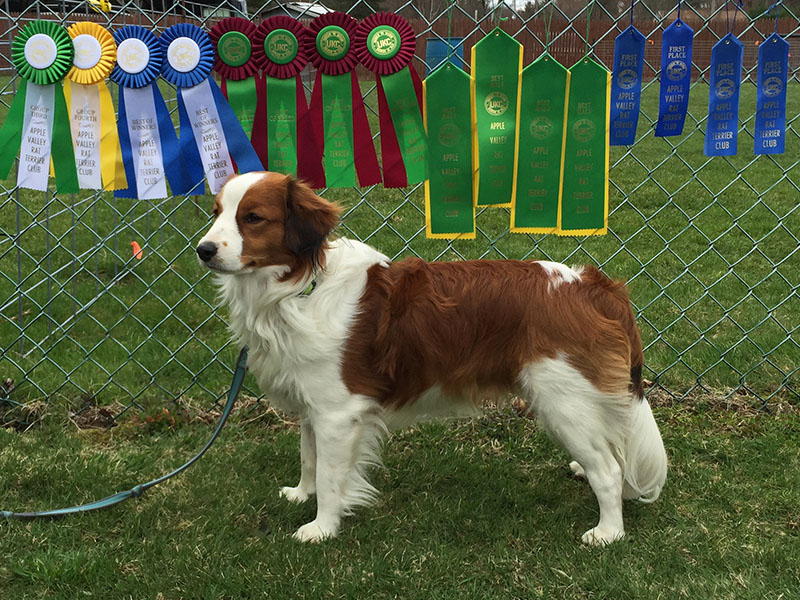 The Nederlandse Kooikerhondje (pronounced Koy-Ker-Hond-Cha) is a medium-sized, spaniel-type dog that was developed in the Netherlands in the 1500s. Bred to lure ducks into traps with its well-feathered tail, the little white and red “Kooiker” was a favorite of the Dutch nobility, often featured in paintings by the Dutch Masters, including Rembrandt and Vermeer. Legend has it that in 1572 a Kooikerhondje saved William of Orange’s life by alerting him to an impending Spanish attack.

This breed nearly went extinct during WWII, but in 1942 the Baroness Van Hardenbroek van Ammerstol decided to try to re-create it. According to the story, she gave a picture of a Kooikerhondje to a peddler and asked him to keep an eye out for these dogs during his travels. He found a young female on a farm in a far-flung province. This female is widely credited with being the founder of the modern Nederlandse Kooikerhondje dog.

The first litter of Kooikers was born in the United States in 1999. Over the last 15 years, the dog has been slowly gaining popularity here, but as of 2015, there were still only about 250 Kooikers in the US. The breed joined the AKC Sporting Group in January 2018.

The lively little Nederlandse Kooikerhondje is a small, squarely shaped sporting dog with medium wavy hair. The head is clean cut, with a moderately rounded skull and a visible (but not deep) stop. The muzzle is wedge shaped and the nostrils are black. The lips are dark and close fitting; the mouth closes in a scissor bite.

The eyes are dark brown and almond shaped and should have a friendly, alert expression. The ears are moderately large and hang down close to the cheeks. It is highly desirable for this breed’s ears to have a distinctive “earrings,” or long-feathered black tips.

The neck is strongly muscled. The topline flows smoothly from withers to tail, and the back is strong, straight, and short. The croup slopes slightly to the well-feathered tail, which should be carried level with the topline or nearly straight up. The belly has a slight tuck-up.

The shoulder slopes to create a flowing line from neck to back. The forelegs are straight and strong, with some feathering. The hindquarters are strong and the thighs are muscular. The hind legs have long, feathered breeches (but no feathering below the hock). Both the fore paws and the hind paws are small, compact, and slightly oval.

The Nederlandse Kooikerhondje’s soft, medium-length coat is slightly wavy or straight and has a well-developed undercoat. It should be neither curly nor silky. The fur on the head, front of the legs, and feet should be shorter than on other parts of the body.

The coat color is pure white with distinct orange-red patches. Some black hair and some ticking is allowed but not desirable, except for the “earrings” mentioned above. There should be a clearly visible white blaze running down the nose and coloring on the cheeks and around the eyes. A black line where the color on the croup changes from orange-red to the white of the tail is also allowed, but no other tri-color markings are acceptable.

The Kooiker’s gait is graceful and springy, and he moves with his head high and his tail held level at or above the topline.

The Nederlandse Kooikerhondje tends to put on weight easily, so do not overfeed. The breed is known to have to several hereditary diseases, including von Willebrand’s Disease (a blood-clotting disorder), cataracts, patellar luxation (a dislocation of the knee cap), and Hereditary Necrotising Myelopathy (a fatal neurologic disease). As puppies, Kooikers need a lot of socialization to get over a tendency toward shyness with strangers and other dogs.

The Nederlandse Kooikerhondje is a happy, well-behaved, lively little dog. Eager to please and adaptable, he tends to be quiet indoors but peps up considerably outdoors. He can be aloof with strangers, but once he warms up, he will accept them. Kooikers are very loyal to their masters. As a smart, sensitive breed, this dog needs strong but calm handling, as well as plenty of mental and physical stimulation and interaction with the family to prevent him from getting bored and/or destructive. Kooikers are well known for their trainability and versatility.

Books about the Nederlandse Kooikerhondje