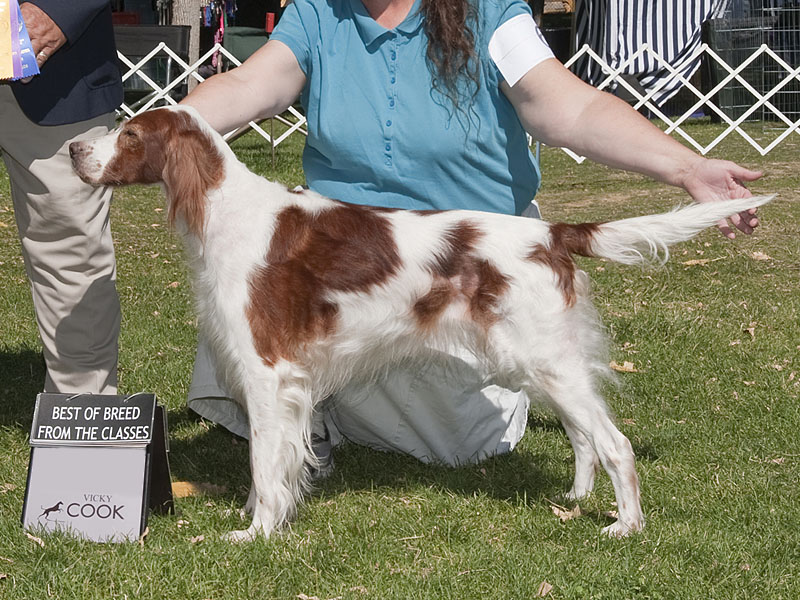 While most people think of Irish Setters as being red, the original ones—which date back to the seventeenth century—were actually red and white. The dogs were bred to “set” (or crouch) in front of game and waterfowl, which allows the hunter to more easily find and shoot the quarry. Back before guns, setting dogs would crouch in front of game, and a hunter would throw a net over both the dog and the target. In the mid-nineteenth century, the solid red Irish Setter became more popular, and the parti-colored dog fell out of favor. By World War I, the breed was nearly extinct, but luckily two cousins from County Down in Ireland began an active breeding program. Several Irish Red and White Setters were imported to the United States in 1983, and the Irish Red and White Setter Club Inc. was formed in 1997. The breed became part of the AKC Sporting Group in 2009.

Strong and athletic, the Irish Red and White Setter needs to be powerful enough to work in the field, but not so bulky as to get bogged down. The head is broad, with a good stop and a domed skull. The round eyes are hazel to dark brown. The ears sit level with the eyes, lie close to the head, and are not droopy, so brush and seeds don’t get into them in the field. The neck should be fairly long, muscular, and slightly arched. A scissors bite is preferred, though a level bite is acceptable.

The Red and White Setter’s body is muscular, with a deep chest; the topline is level and the back and hindquarters are very powerful. The feet are close knit, with feathering between the toes. The strong, feathered tail tapers to a fine point. The coat is fine textured with good feathering. Coat colors need to be clearly distinguished, with a base color of white and solid red patches. Mottling or flecking is permissible around the face, feet, forelegs, and hind legs.

Irish Red and White Setters are generally bred either for the field (hunting) or as pets; field dogs tend to be much more high energy. But because they are sporting dogs, even Red and White Setters bred for family life require mental and physical stimulation. They are too active for apartment or city living unless the owner is experienced and able to spend extensive time exercising and training the dog. Although the dog is shown in its natural state, regular (weekly) brushing is recommended, as well as frequent checking for burrs and matting in the coat feathers. The breed is very hardy. Its primary health problem is canine leucocyte adhesion deficiency (or CLAD), an autoimmune disease, but the breed is also prone to cataracts and Von Willebrand’s disease.

Books about the Irish Red and White Setter