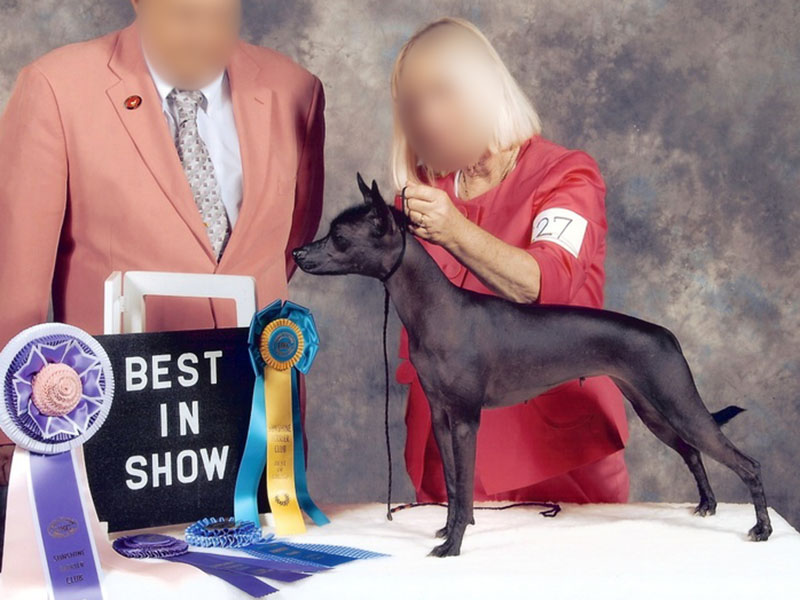 Also called the Mexican Hairless and the Tepezcuintli, the Xoloitzcuintli (pronounced show-low-eats-queen-tlee) has existed in Mexico for more than 3,000 years, making it the oldest dog in the Americas. The name is a combination of the Aztec god Xolotl (god of the underworld) and the Aztec word for dog, itzcuintli. The Aztecs and other indigenous people believed the dogs helped guide souls to the afterlife. The remains of Xolos have been found buried with ancient Toltec, Aztec, Mayan, and Zapotecan Indians, presumably to help them into the afterlife.

Xolos have long been prized for their loyalty, intelligence, and purported mystical healing abilities. In fact, they are still viewed as healing animals in Mexican and Central American villages, where they are thought to ward off ailments ranging from asthma to rheumatism, as well as intruders ranging from evil spirits to burglars. In the United States, sufferers of rheumatoid arthritis and fibromyalgia also claim to have derived pain relief from the hairless varieties, perhaps because of the heat generated by their bare skin.

Xolos can be seen in paintings by famous Mexican artists, including Diego Rivera and Frida Kahlo—both of whom had the dogs as pets. The Xoloitzcuintli is the national breed of Mexico.

As the Mexican Hairless, the breed became one of the first registered by the AKC and was registered in 1887. But efforts to establish and promote the breed failed because neither Mexico nor the U.S. had any large-scale breeding programs, and there was not much popular interest in the dogs. As a result, the AKC voted to drop the breed from its stud book in 1959. The AKC accepted the Xolo back into its stud book in 1996 and admitted the breed into the Miscellaneous Class in January 2009. The Xoloitzcuintli is now in the AKC Non-Sporting Group.

The Xoloitzcuintli comes in three sizes (toy, miniature, and standard). Each has two varieties (hairless and coated). No matter what the size or variety, this ancient dog’s general appearance should be lean and well-muscled, conveying both elegance and strength.

The Xolo’s face should have a thoughtful, intelligent, noble expression, with almond-shaped, medium-sized eyes that can be anywhere between yellow and black (both eyes should be the same color). The brow should wrinkle when the dog is alert. The erect, bat-like ears are large, yet delicate, and they taper to a rounded tip.

The Xolo’s skull is wedge-shaped; its stop is not pronounced. Hairless varieties can lack premolars, but the coated dogs should have all of their teeth. The neck is long and slightly arched; young dogs may have wrinkled necks, but dogs older than 1 year should have smooth skin. The loin has a slight tuck-up, and the long tail is set low and has a graceful curve, but it shouldn’t curve over the back. The front legs should be long, straight, and parallel with hare feet (meaning the two middle toes are longer than those on the side). In some dogs, the feet are webbed.

The hairless variety of the Xolo is totally bald, except in some cases there are tufts of short, coarse hair on top of the head and feet, as well as along the last third of the tail. The skin should be hard and smooth, with no wrinkles. The coated dogs are covered with a short, smooth coat that should be uniformly black, gray black, slate, red, liver, or bronze. Some white markings are permitted.

Due to its primitive nature, the Xolo has few hereditary health problems. The breed tolerates high temperatures well, but the hairless variety needs protection from the cold. Hairless Xolos need to be bathed every two weeks, and they sometimes have skin conditions (dry, flaky skin and also clogged pores) that require special shampoos, scrubs, and even oatmeal masques. The coated dogs need to be brushed weekly. Hairless and coated varieties occur in the same litter.

Widely described as calm, loyal companions, the Xolo hasn’t undergone much artificial selection, so they tend to exhibit a strong primitive instinct to guard their territory and “pack.” As such, they make excellent watchdogs. They also tend to have high predatory drives, which can make it difficult to keep them with smaller dogs and other household pets. Xolos are easy to train, but not at all compliant dogs; they need to be well trained as puppies to prevent them from becoming dominant. The breed tends to be good with children, but needs to be supervised with them. Xolos are renowned for climbing over (and digging under) fences when they are bored, and for being rather lively and destructive as puppies. They like being around their people and don’t do well as backyard or kennel dogs.

Books about the Xoloitzcuintli