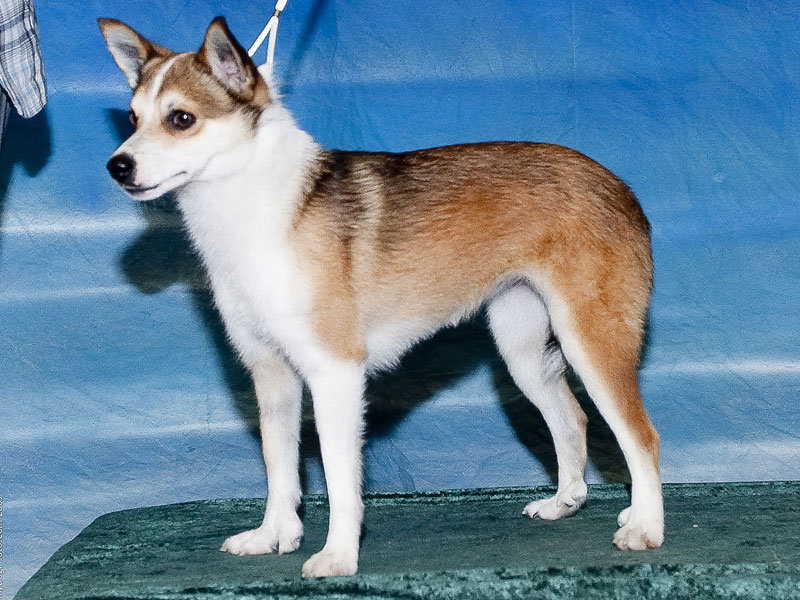 The remarkable Norwegian Lundehund helped residents hunt puffins for centuries on the remote Lofoten Islands, north of the Arctic Circle in Norway. This small, extraordinarily agile, and amazingly flexible dog scrambled over the steep scree-covered cliffs and into the cramped passages and crevices where puffins nested to capture the birds. Some dogs were able to bring in as many as 50 birds a day. Puffins were extremely important to the residents of the Lofoten Islands, providing not only meat, but valuable down for clothing and blankets. Therefore, many households kept multiple Lundehunds, and a dog was considered to be more valuable than a cow.

In the eighteenth century, puffin-hunting techniques changed in Norway. Hunters began using nets to catch the birds, and the Norwegian Lundehund was no longer a necessity. Eventually the puffin became an endangered species, and the Lundehund almost disappeared.

A woman named Eleanor Christie took an interest in reestablishing the breed, resulting in a kennel with more than 60 Lundehunds. Due to the lack of distemper vaccine during World War II, the population of Lundehunds on the Lofoten Islands was decimated. By 1960 there were only six Lundehunds known to be in existence worldwide. Christen Lang established a strict breeding program, which Norwegian Lundehund breeders still follow today, and the breed was once again saved from extinction.

The Norwegian Lundehund is a small, energetic dog of the Spitz family. The breed has several very unique physical characteristics.

Ideally, the Lundehund has at least six toes on each foot, including one with musculature very much like the human thumb. These extra toes were invaluable to the hunting Lundehund, which had to maneuver in narrow tunnels and move surely and swiftly on steep, slippery rocks. (Other breeds of dogs usually have only five toes on the front feet and four toes on the hind feet, and some pet Lundehunds have five.)

Though the position of the Lundehund’s medium-sized triangular ears is normally upright, the ears are extremely mobile. The breed has the ability to close the ears off by bending them forward or backward, a characteristic that may have helped them keep dirt and water out when hunting. Lundehunds can also raise each ear partially, which may have allowed them to put one ear partway up to listen for puffins while the other was flattened against the head inside a crevice.

In addition, the Norwegian Lundehund’s neck and shoulders are extraordinarily flexible. The dog’s neck can bend backwards until its back skull touches its spine, and the shoulders are so flexible that the front legs can be spread very wide without causing any discomfort to the dog.

The Norwegian Lundehund’s body is slightly longer than its height, with a double coat consisting of a harsh outer coat and a soft, dense undercoat. The hair is short on the head and the front of the legs. Males usually have a thicker ruff around the neck. The proper coat color is specified in the standard.

The head of the Lundehund is a moderate wedge, with a slightly rounded skull. The stop is pronounced, but not too deep, and the bridge of the nose is slightly arched. The muzzle should be about two-thirds the length of the skull. The lips and nose are black, and the almond-shaped eyes are yellowish-brown to brown, with preference given to a lighter color.

Rear dewclaws are removed; front dewclaws can be removed. The tail can be docked if the dog is not born with natural bob tail. This is a generally hardy, healthy breed, but some lines are prone to hip dysplasia and certain eye diseases, including iris coloboma (in which a hole in the iris allows too much light to enter the eye, resulting in squinting and impaired vision in bright sunlight); collie eye anomaly (a disorder that affects the parts of the eye that aid in night vision and protect the retina from glare in daylight); microphthalmia (abnormally small eyes); and progressive retinal atrophy (a degenerative disorder of the photoreceptors, which can result in blindness). In merle-to-merle matings, puppies that inherit merle genes from both parents (called “homogenous merle” or “lethal white”) may have severe health problems, including hearing and vision problems. (Note:Not every puppy born to two merle parents will inherit two merle genes.)This breed can carry the MDR1 gene, which makes the dog susceptible to negative reactions to certain drugs and medications. DNA testing for this gene is available. If the dog carries this gene, avoiding the use of those medications will prevent the negative reaction from occurring.

The vivacious, playful, affectionate, and charming Lundehund has a different personality than many other dog breeds. In fact, Lundehunds have been described as a cat and dog in one package. They are as independent as cats, and like to climb. Inquisitive, and always exploring; very little is out of their reach.

As a legacy from their puffin-hunting past, Lundehunds have a strong prey drive and pack instinct—they enjoy working together to hunt birds, mice, and other small furry creatures. They have been known to get along well with cats, but other small pet animals and birds may be in danger. With their dexterous extra toes, determined Lundehunds have been known to open guinea pig cages and help themselves to the contents.

Lundehunds are independent thinkers. They have not been bred for centuries to seek and value human approval, so they can be stubborn. Lundehunds are extremely intelligent and need mental stimulation, but training a Lundehund requires patience. Owners need to use positive reinforcement and keep the lessons short and never boring. Even so, the Lundehund’s idea of what he wants to do may not match the owner’s desired outcome. They would often rather spend their time exploring off-leash, looking for items of interest in every nook or cranny. They will come to you when they want something from you.

Lundehunds need extensive and early socialization or they may become shy and stressed about unusual situations. Though generally good with children if properly socialized with them, they may not tolerate rough treatment. They tend to be reserved with strangers, but very well- socialized Lundehunds can be friendly with people outside their family group. They are quite owner-oriented and will initiate games, looking for your interaction, on their own terms, of course.

Books about the Norwegian Lundehund