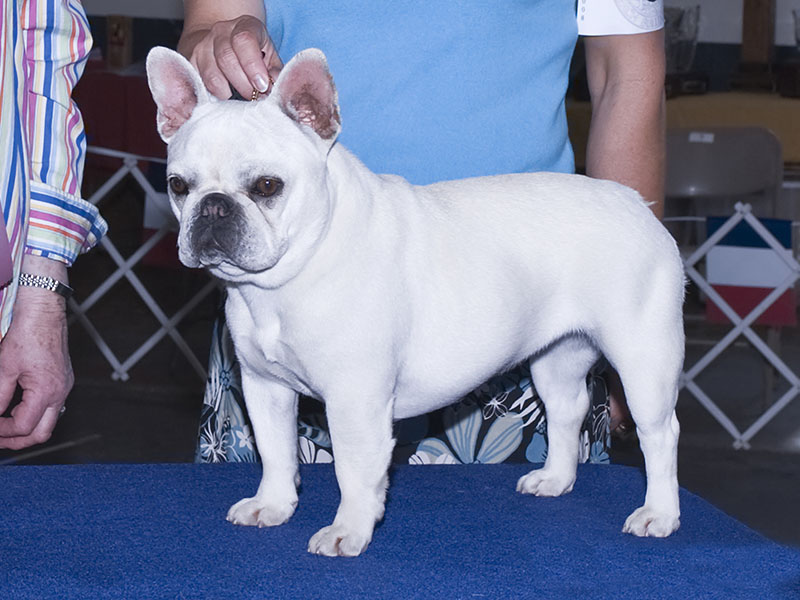 The French Bulldog was originally developed in England as a miniature version of the English Bulldog (which is now simply called Bulldog in the AKC). These small bulldogs were adopted by Nottingham lace workers who went to France and took their dogs with them. Streetwalkers in France greatly admired the imports, and this led to the name “French Bulldog.” When the breed was eventually brought back to England for exhibition, the English made a big uproar about the name “French Bulldog” because the Bulldog was originally an English breed, and because the Bulldog was a traditional symbol of English culture. They also objected to the bat ears. In the late 1800s, the breed caught the attention of the upper class in France and then America. Popularity soared, and by the early 1900s, they were one of the most popular show dogs in America. At one time, there were two weight classes of French Bulldog: 19 to 22 lbs. and 22 to 28 lbs. Now there is just one weight class, with a weight of more than 28 lbs. eliciting a disqualification. The French Bulldog is a pleasant, easy-care companion.

The French Bulldog is a sturdy little bulldog with large, erect, rounded bat ears and a flat muzzle. The square flat head is not as massive as the English Bulldog’s. The forehead is rounded. Height doesn’t matter as long as the dog is well balanced. The height at the withers should be approximately the same as the length from withers to tail set. The dog should be pear shaped, with the shoulders wider than the tail area. The short, soft, easy-care coat comes in brindle, fawn, white, and combinations of brindle or fawn with white. The skin is soft and fairly loose, making the dog very pleasant to pet. The prominent round eyes are dark colored and the bite is undershot. The tail is either straight or corkscrewed.

Particularly good for the elderly. Clean, quiet, and companionable. Sensitive to temperature extremes. Overheating this dog may cause heatstroke; he prefers cooler climates. Prone to eye and respiratory problems. If too overweight, the French Bulldog might have trouble breathing. May wheeze, snore, and be gassy. This breed cannot swim because of his physique, so be very careful around swimming pools. Bitches must usually deliver by Caesarean section because of the puppies’ large heads.

Very sweet, playful, and affectionate. Bright and easygoing. Curious and alert. Devoted; often bonds strongly to a single person. Needs lots of companionship and will not thrive without it. Fairly willful, but can be trained if the owner is patient.

Books about the French Bulldog