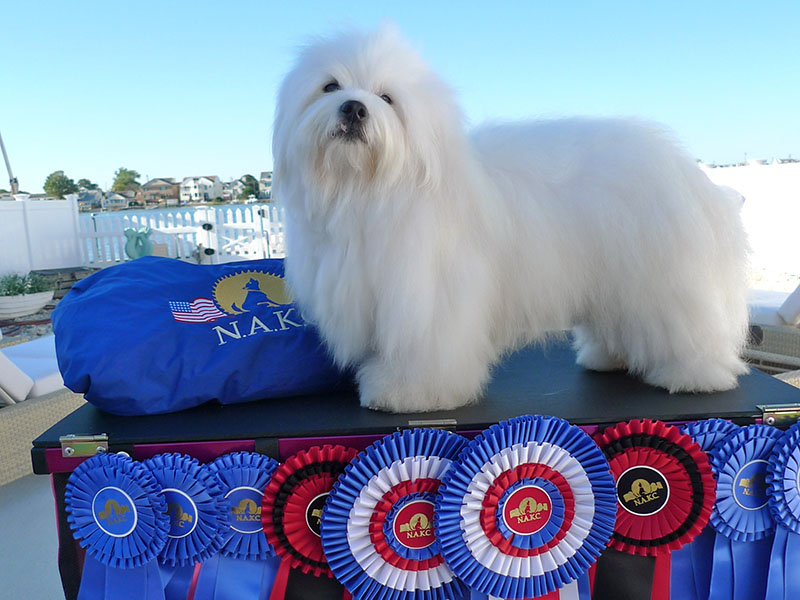 The name Coton de Tulear means “cotton of Tulear,” which refers to the dog’s soft, fluffy coat and a city in Madagascar. While the history of the breed is unclear, today’s Coton de Tulears may be descendants of Coton de Reunions, which accompanied ladies on ships. The most commonly told story is that some Coton de Reunions swam from a shipwreck to the Madagascar coast in the fifteenth century and then bred with local dogs. Some of these became wild dogs on the island, hunting closely in packs. Others became the pampered pets of the Merina, the ruling tribe in that country. These little white dogs were so cherished, in fact, that neither coastal tribesmen nor non-nobility were allowed to own one. Because of this, the Coton became known as the “Royal Dog of Madagascar.” The French—who colonized Madagascar in 1896—also ruled that these dogs could only belong to the ruling class. Due to political and economic upheaval in Madagascar, the Coton is in danger of becoming extinct there, but Americans have been breeding the dogs since 1974, when a biologist studying lemurs in Madagascar sent some of the dogs to his father in New Jersey.

Today these fluffy, happy little white dogs are among the fastest-growing rare breeds in North America and Europe. The Coton de Tulear joined the AKC Miscellaneous Class in June 2012 and the AKC Non-Sporting Group in 2014.

The Coton de Tulear’s general outline should be sturdy and rectangular, but covered with a long, white cotton-like coat. The head is short and, as seen from above, triangular. The skull is slightly rounded. The muzzle is straight with black nostrils and tight, fine black lips. A scissors or level bite is acceptable. The eyes are round, dark, expressive, and intelligent. Rims of the eyelids should be black. The triangular ears should reach the corners of the lips and should have fine tips. The ears can be white, light gray (a mixture of gray and white hairs), or light tan (a mixture of white and light tan hairs).

The neck is well-muscled and the topline is slightly arched over the loin. The loin is short. The chest is well-developed and the ribs are well-sprung. The belly is moderately tucked up. The tail is set low and hangs below the hock when the dog is at rest. When the dog is moving, the tail is curved over the back, with the point aiming toward the neck, withers, or back. In dogs with very thick coats, the tip can actually rest on the back.

The feet are small and round, with tight arched toes. Back dewclaws are acceptable. Shoulders and upper thighs are well-muscled. The gait, according to the FCI standard, should be “free and flowing.” It doesn’t cover a lot of ground, but it should be even.

The fluffy coat is dense and soft, with the texture of cotton. It can be slightly wavy. The base color is white, but a few shadings of gray or tan are allowed on the ears. Gray or tan can appear on the body as well, if they don’t cover more than 1 percent and don’t alter the general appearance of having a white coat.

Front dewclaws can be removed after two to three days, the customary age for all puppies for this procedure. This is a hardy breed with few health issues, but the dogs need to be brushed at least every other day and bathed once a week. Feet and pads should be trimmed to keep dog from slipping. Many people who don’t show their Cotons keep them in a puppy cut to make grooming less time consuming.

The Coton de Tulear is a stable, happy little dog who loves people and other dogs. Friendly, sweet, and full of joy, Coton de Tulears are relatively calm. They adore children and are patient with them. They are also easy to train and love to please their owners and perform. As a result, they excel at agility and tricks. (They are known for standing on their legs and “walking” to please their owners.) They will follow their owners around the house to stay close to them, and they tend to grunt and growl to “talk.” They are also excellent watchdogs. Despite the long, luxurious hair, Cotons don’t shed and have no doggie odor.

Books about the Coton de Tulear