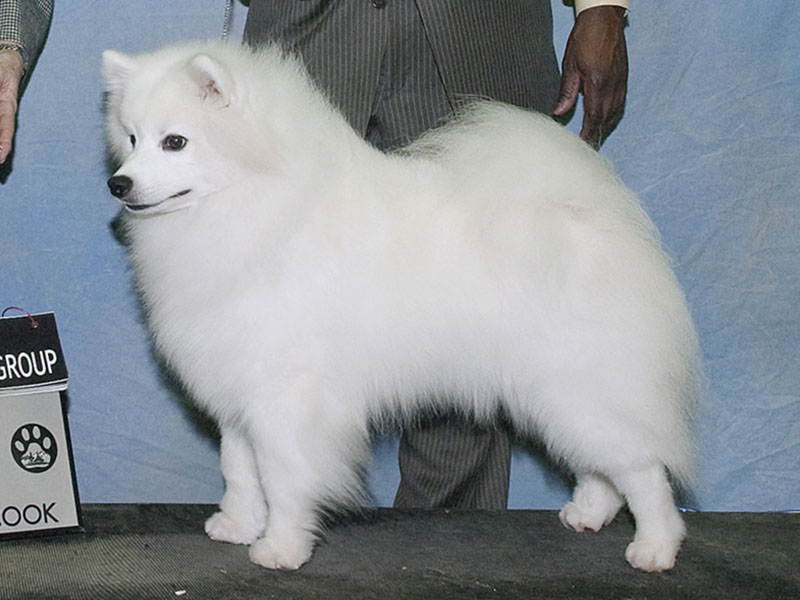 The American Eskimo Dog is a beautiful snowy white, Spitz-type dog that looks like a miniature Samoyed. The breed comes in three size varieties: Standard (15 to 19 in.), Miniature (12 to 15 in.) and Toy (9 to 12 in.). The breed has a wedge-shaped head, triangular prick ears, and a heavily plumed tail carried loosely over the back. The brown eyes have white lashes. Pads of the feet are dark with white toenails. The profuse double coat is pure white or white with biscuit cream. The nose, lips, and eye rims are black. The coat is heavy around the neck, creating a ruff or mane, especially in males. The coat is surprisingly easy to care for. A once or twice weekly brushing is generally quite satisfactory.

Naturally wary of strangers. One Eskimo owner says, “No stranger can enter our home until we’ve told our Eskies it’s OK.” This breed should be thoroughly socialized when young to avoid potential aggression-related accidents. Eskimos need to be part of the family; they tend to engage in nuisance activities when isolated. Handle them gently but firmly. This breed needs attention and loves to bark. The American Eskimo Dog has been exploited by those who sell inferior quality animals with poor temperaments and other serious problems. Buy only from a reputable source.

Charming, affectionate, and loving. Hardy and playful. Highly intelligent and willing to please. Alert. Easily trained; often ranks among the top scorers in obedience trials. Some individuals have a willful streak, but most like to work. Dogs whose ancestry displays nervousness, hyperactivity, or viciousness should not be bred.

Books about the American Eskimo Dog