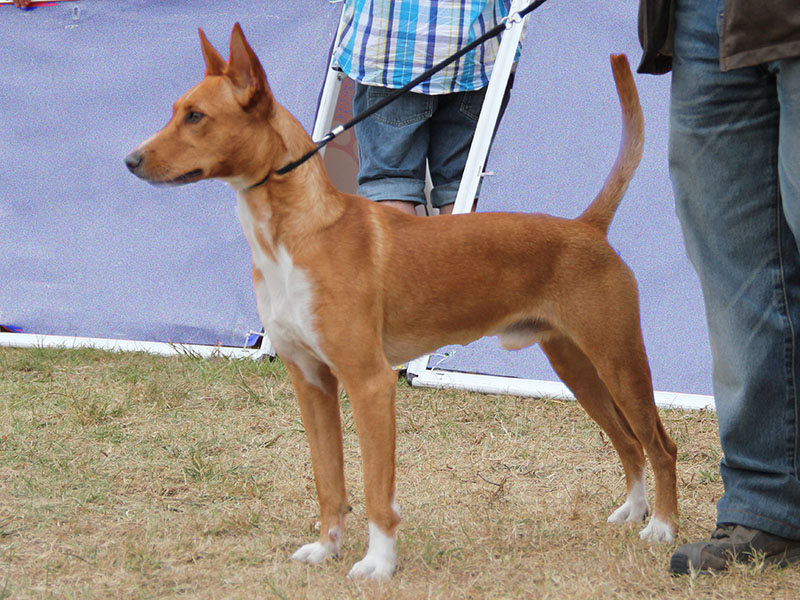 The Podengo is a primitive Portuguese hunting breed. It is most likely the descendant of multi-purpose hunting dogs used by Phoenician traders who reached Portugal in the 700s BC. Today, the Podengo is the most popular type of dog in Portugal and comes in three sizes: Pequeno (small), Médio (medium), and Grande (large). Each size comes in two varieties: smooth and wire-coated, making six types altogether. (The six types are not inter-bred.)

Called “triple threat hunters” because they use scent, sight, and hearing to find their game, all Podengos hunt in packs. The Médio, bred to hunt rabbit and wild boar, stalks its game and then flushes and/or kills it. The Grande, bred to hunt deer and wild boar, either kills the game or runs it down to exhaust it and then waits for the handler to shoot it.

Podengo Grandes are newer to the US. The first Podengo Grande was imported to the US in 2008. The first litter was born in 2009. That same year, four wire-coated Grandes were also imported.

Hardy, intelligent, and fun-loving, these agile, playful dogs are still very rare in the United States, with fewer than 175 dogs registered as of 2014. This means that breeders are still collecting data on some characteristics of the breed, such as longevity and health issues.

Lean and muscular, both the Grande and Médio varieties of the Portuguese Podengo are almost square in shape. The head is lean and shaped like a four-sided pyramid. The stop is moderately defined and the cheeks are oblique (not parallel). The lips are thin and close fitting, with teeth that meet in a scissors bite. The nose is always darker than the coat. The eyes are almond shaped and expressive. The ears are triangular, pricked, and carried highly erect.

The hindquarters are well muscled. The rear pasterns are strong, short, and straight; there are no dewclaws. The feet are oval, with long slightly arched toes and dark nails. The tail is thick at the base and tapers to a fine point. When the dog is at rest it falls into a slight curve; when the dog is in motion, it is carried slightly curved or even in a sickle shape.

The smooth coat is short, dense, and has an undercoat. The wire coat is rough and has no undercoat. Wire-coated Podengos also have distinct beards. They are shown in a natural state; only trimming of the face and feet is allowed. The coat color is yellow and white or fawn and white of any shade, or primarily white with patches of any shade of yellow or fawn. Tones of black or brown, with white patches, or white with patches of black or brown are acceptable but not preferred.

The Portuguese Podengo is generally not good with small dogs or cats due to its strong prey drive. The breed needs secure fences, at least six feet high, with hardware cloth dug into the ground at the base, as they are excellent jumpers, climbers, and diggers. Wire-coat varieties need occasional brushing to remove old hair.

These smart, active, and agile dogs make fine companions. They were bred to be hunters, so they are alert enough to be good watch dogs. But they are friendly, playful, and loyal enough to be excellent family dogs. Podengos are highly trainable. As a general rule, Grandes tend to be a bit more mellow than Médios. Still, the fact that they are a primitive breed means that a more experienced dog owner is best suited to handle them (although novice owners may do well with an adult dog that is already trained). Socializing Podengos is especially important, as is maintaining a firm (but fair) style of discipline and giving them plenty of exercise and mental stimulation. Highly motivated by food and fun, they tend to be easy to train. Both Médios and Grandes can be wary with strangers, but they love to play and interact with their people.

Books about the Portuguese Podengo