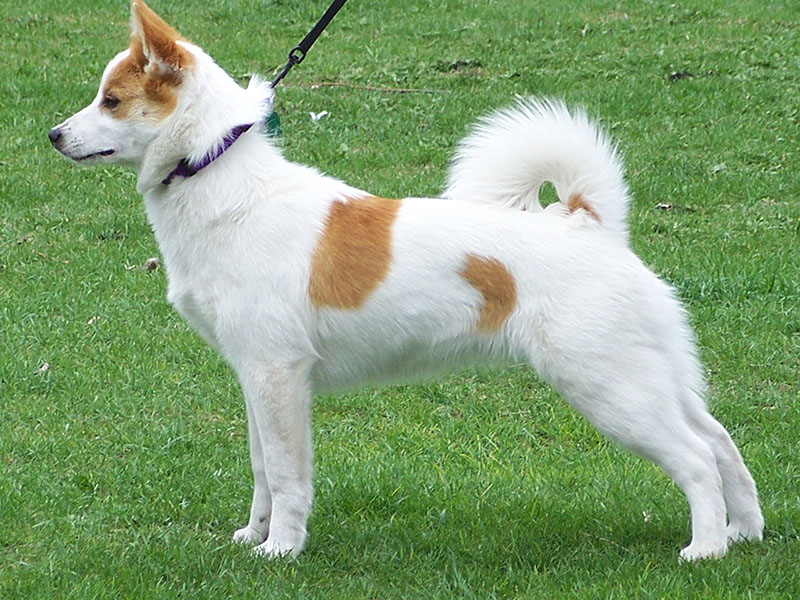 A descendent of small spotted dogs used for hunting by ancient Scandinavian peoples, the Norrbottenspets (pronounced “Nor-bot-ten–spitz”) originated in Norrbotten, Sweden, and Lappland, Finland, where they were used as hunting and farm dogs as far back as the early 1600s. The Swedish Kennel Club accepted these small Spitz dogs in 1910, but the breed nearly became extinct after World War I, with just a few dogs being kept as farm dogs and pets in far northern villages. The Swedish Kennel Club declared the breed extinct and closed its stud book in 1948 (just 38 years after the dogs had been registered), but devotees started a successful breeding program in the 1950s. In 1967 the Swedish Kennel Club accepted the dog for registration again with a new breed standard. Finland accepted the dog in 1973. In that country, they are called Pohjanpystykorva, pronounced “poh-zhawn-pie-stick-korva.”

In both countries breeders are working to preserve the breed. In the United States, the AKC accepted the Norrbottenspets into its Foundation Stock Service in November 2007. The breed entered AKC’s Miscellaneous Class in 2014.

Unlike most hunting breeds, the Norrbottenspets uses sight, scent, and sound when hunting. Once it finds game, the dog flushes and then chases the game until it is cornered or treed. The dog then holds it there by barking rapidly at a high pitch, which both confuses the game and covers the sounds of the hunter’s approach. (During trials the dogs may bark up to 100 times per minute.) Because the dogs are used to hunt everything from upland grouse to raccoons, elk, and even moose over rough, forested terrain, Norrbottenspets are agile, strong, and generally fearless.

The Norrbottenspets’ overall appearance should be compact and well-muscled, but not bulky. The eyes should be brown and almond-shaped, with pigmented rims; the medium-sized ears are upright. The nose is black and the lips are thin and tightly fitting. The head is broad, but clean cut and tapers evenly to the nose. The teeth meet in a scissors bite.

The back and loin are level; the back is short and muscular. The chest is long and oval and the belly tucks up slightly. The dog carries the tail in a loose curve, with the tip touching the side of the upper thigh. (A bobbed tail is a disqualification for shows, but does not impede hunting.)

The front legs are straight and parallel. The feet are small and strong, with well arched toes. These dogs have dewclaws on their forelegs but not on their back legs. The upper thighs are long and strong and the pasterns are also long. The gait is smooth, free, and strong, and exhibits much freedom of movement.

The Norrbottenspets has a hard, short top coat with a fine, dense undercoat. The base color is white, but the dogs have masks that cover the sides of their head and ears, plus patches of color on the body.

The Norrbottenspets can vocalize a lot when excited. This breed requires little brushing except during seasonal sheds, when regular grooming is recommended.

Fearless to the point of being daring, Norrbottenspets are calm, confident, intelligent, and very alert. Their history as working dogs makes them excellent watch dogs. Their strong prey drive means they shouldn’t be off leash in an unfenced area and they may chase small pets from other properties. (They are generally OK with their own family’s pets if raised with them from puppyhood or introduced very slowly as adults). That same exuberance means these Spitz-type dogs also love to please their owners and leap at the chance to do work such as obedience, agility, lure coursing, jogging, and hiking.

Books about the Norrbottenspets