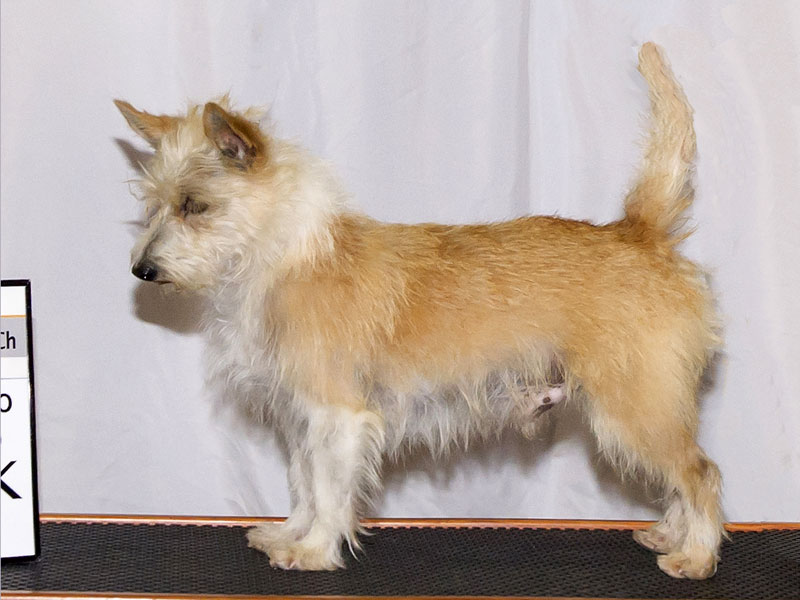 The Portuguese Podengo Pequeno arrived on the Iberian Peninsula with the Phoenicians more than 2,000 years ago. The breed can still be seen on eleventh-century churches in Portugal and in some literature dating back to the fourteenth century. Farmers in Portugal used the dog for hunting rabbits and small game, and they were bred to have tremendous endurance, be able to penetrate thickets, and hunt alone or in small packs.

The first Portuguese Podengo Pequeno came to the United States in the 1990s; as of 2011, there were several hundred of these dogs in this country, valued as both pets and athletes. The breed, which can have either a smooth or wire (rough) coat, excels in agility, obedience, and rally, as well as lure coursing. It is also still a popular hunting dog due to its ability to locate prey via sight, sound, and smell.

Small in stature and rectangular in shape, the Portuguese Podengo Pequeno has a wedge-shaped head and erect ears. The muzzle is pointed and the stop is barely defined. The eyes should be almond shaped, honey to dark brown in color, with a lively expression. The triangular ears should be set at the level of the eyes, and are carried upright or tilted forward when attentive. The entire body is well muscled. The back is straight and long; the belly is lean and slightly tucked up. The tail should be strong and tapered with light feathering along the underside. When raised, it should have a sickle shape. The feet are oval with toes slightly arched.

The coat can be either smooth (short and dense) or wire (rough, long, and harsh). The wire-haired variety has a beard. Coat color ranges from yellow to dark brown or black, although yellow and fawn are preferable. White markings are acceptable.

The Portuguese Podengo Pequeno’s trot is light and agile, well suited to hunting for hours at a time over rough terrain.

The Pequeno is a very hardy, healthy breed with few health issues. Legg Calves Perth, a degenerative condition of the hip joint, and luxating patella, a looseness in the stifle joint (knee), have occasionally been reported in the breed. Life expectancy is 15-plus years. They are excellent climbers and jumpers, so a high fence is needed in the yard.

The Portuguese Podengo Pequeno is a keen, active, enthusiastic little dog that is easy to train and easy to live with. They are loyal and brave and make good watchdogs. They are very good with children and with other dogs and pets when raised with them. This is a primitive breed, and the dogs tend to have acute senses of sight, scent, and hearing. They are somewhat wary of strangers and will alert their owners to unfamiliar people and noises. This breed does well with most owners, including novices.

Books about the Portuguese Podengo Pequeno