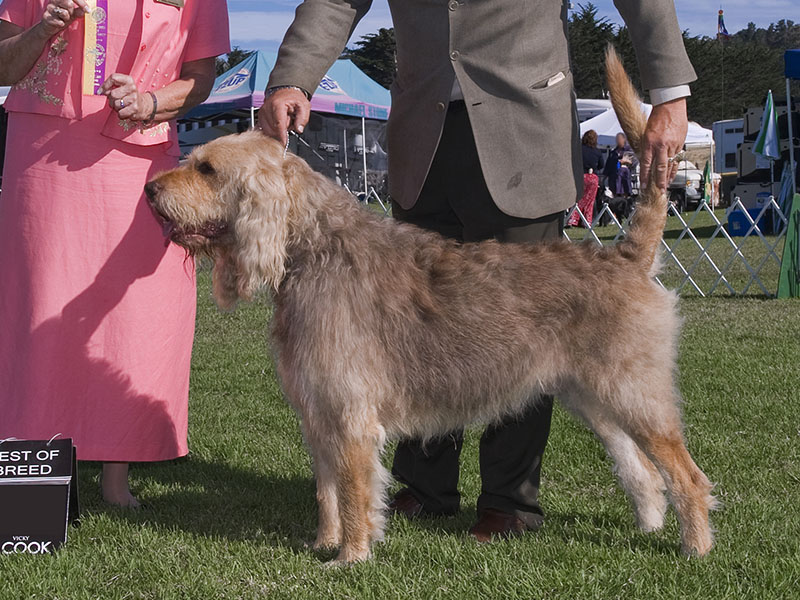 The Otterhound was developed by crossing the Bloodhound with terriers, griffons, and the Harrier. Otterhounds were used in packs for controlling the otter population because otter competed with fishermen for the natural trout supply in rivers. Several British kings were titled “Master of Otterhounds,” including King John (1199–1216); Richard III; Charles II; Edward II and IV; Henry II, VI, VII, and VIII; and Elizabeth I. In the late 1800s, there were sometimes more than a dozen packs operating in Britain during every hunting season. In the twentieth century, as the otter population diminished, so did the Otterhound’s popularity. By 1978, the otter became a protected species, and the Otterhound’s existence was threatened. A concerted effort by several dedicated breeders saved the breed and brought these dogs to the show ring. The Otterhound is a great swimmer, with the ability to swim for hours without stopping. The breed also has been used successfully to hunt raccoon, bear, and mink. He can also make a fine family companion.

The Otterhound is a large, rough-coated dog with a shaggy face and bushy eyebrows. The head underneath the hair is large, deep, and narrow, somewhat like a Bloodhound’s. The head should be 11 to 12-in. long from the end of the nose to the occiput for a 26-in.-tall dog. Other sizes should have similarly proportioned heads. The ears are low set, long, and dangling, with the front edge folded or rolled for a draped look. When pulled forward, the ear should reach at least to the tip of the nose. The tail curves up like a saber. The nose is large and dark (either black or liver depending on the color of the dog.) The eyes are deep set with a little haw showing. Under the coarse outer coat is a dense, woolly, slightly oily, water-resistant undercoat for protection in frigid waters. All hound colorations are acceptable, but the coat usually comes in grizzle or wheaten with black markings. Like many other pack hounds, the Otterhound has a melodious and powerful voice and likes to bay, though he doesn’t bark excessively. The feet are webbed for swimming.

Might be clumsy with children; not recommended for households with infants. Likes to roam and sniff. Do not overfeed-prone to bloat and weight gain. Has a tendency to snore. Needs lots of exercise and, if possible, frequent swimming. Beware of hip dysplasia. Buy only from stock with OFA, PennHIP, or another national hip-dysplasia clearance. This breed is also prone to hemophilia. The coat needs frequent grooming, at least weekly, to prevent matting.

Bold and exuberant. Boisterous. Cheerful, loving, and devoted; a good companion. Do not trust this dog around small non-canine pets. Tends to be quite willful—training takes great patience.

Books about the Otterhound