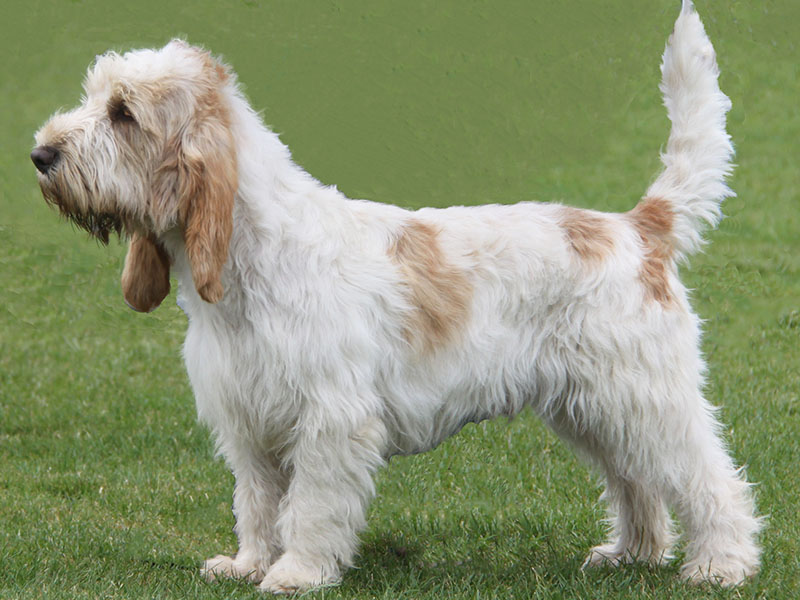 This long, low hound is the descendant of the rough-coated hounds brought to Gaul (now known as France) by the Romans in the first century B.C. By the 16th century, the French aristocracy, who considered hunting the sport of kings, had created about a dozen breeds of hounds, all bred for different game (hares, boars, fox, and upland birds). For example, longer-legged hounds could hunt larger game for the aristocracy, who could follow these swift dogs on horseback. Short-legged hounds, like the Petit and Grand Basset Griffon Vendéen (shortened to PBGV and GBGV respectively), were better suited for less wealthy hunters who had no horses, so hunters could keep up with their dogs as they hunted small game such as hare and rabbit on foot.

A scent hound, the GBGV generally hunts in packs (much like the Foxhound and Beagle). The breed is valued for its courage, stamina and generous voicing while on the trail. In both the United States and Europe, the GBGV has also been used for tracking people.

The Grand Basset Griffon Vendéen was only imported into the United States in 1989, when just three dogs arrived. The fourth did not arrive until 1991. The dogs were bred to each other and started producing litters that year. Only a few other dogs have been imported since that time; less than a half dozen people are breeding them in the US.

The AKC began recording the GBGV in its Foundation Stock Service in 2004 and the breed was welcomed to the AKC Hound Group as of January 2018.

The Grand Basset Griffon Vendéen should be well-balanced, strongly built, and longer than tall with a moderately long muzzle, long ears, and a long tail. The eyes are large, dark and oval, with pigmented rims. The ears should be long and narrow, with oval tips and long hair, set below the level of the eye. The skull is domed, the stop should be well defined, the muzzle is long, and the nose bridge is slightly Roman. The dog should have both a beard and a mustache. The nose should be black, except in dogs with white/orange and white/lemon coats, in which cases the nose can be brown.

The neck is strong and thick at the base. The top line is level, with slightly prominent withers and a slight rise over the loins. The body should be sturdy and broad, the loin well-muscled. The GBGV’s belly has no tuck up. The long, hairy tail extends at least to the hock and tapers slightly and should be carried like a saber or slightly curved (but not over the back).

The front legs are straight. The back legs have a strong, well-defined thigh. The feet are large, oval, and tight with strong, short nails. Both front and back dewclaws can be removed.

The coat is rough and straight and has an undercoat. It shouldn’t be too long. Hair on the bridge of the nose should fan up between the eyes; there should also be distinct protective eyebrows. The coat should be tricolor (white with any other two colors), bicolor (white with any one other color), or black and tan.

The GBGV’s gait is free and easy, with the hind legs providing strong drive.

The GBGV does best in a home with other dogs, as they are pack animals. They are prone to dermatitis and ear problems (including infections). This breed is supposed to look rustic, but regular grooming is required to keep the coat free of tangles and mats, and some dogs require trimming around the eyes and ends of ears.

Although the GBGV’s expression is one of nobility and pride (and he is referred to as the “noble hound”), this is not an aloof breed. Friendly, intelligent, and relatively calm, the GBGV can be a little stubborn but generally wants to please. Put another way, like many hound breeds, the GBGV has an independent streak, but he pays attention to his owner. This breed, in fact, loves fun and people so much he has been dubbed “the happy breed” in the United Kingdom. His adorable scruffiness makes him look endearing, but remember, this is a serious hunting dog who thrives on running across all types of terrain and having a job to do. Secure fencing is needed to be sure he doesn’t zoom off your property in pursuit of prey. Keeping him leashed while on walks or jogging is recommended.