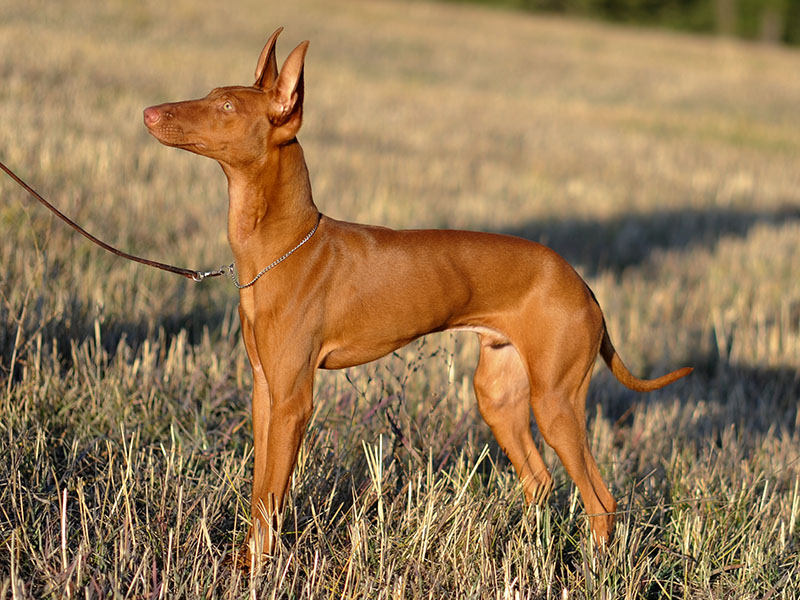 Named after Sicily’s Mount Etna, which is the largest active volcano in Europe, this medium-sized hunting dog probably dates back to the 5th century B.C. The proof? Archaeologists have found coins imprinted with images of a dog that looks very similar to the contemporary Cirneco dell’Etna (pronounced “cheer-neck-o”). Legend has it, in fact, that 1,000 Cirnechi (“cheer-neck-ee”) guarded a temple devoted to the god Adranos, who was said to live under the mountains. Those Cirnechi, the legend goes, had the divine ability to recognize thieves and disbelievers. For centuries, the square-proportioned, elegant dogs were used for hunting wild rabbit, using mainly scent but also hearing and sight to find prey. Often the Cirneco was partnered with a ferret for hunting. (The dog would find the rabbit and the ferret would flush it out.) This ancient hunting breed wasn’t known outside of Sicily until 1932, when an Italian veterinarian wrote an article decrying its dwindling numbers. A Sicilian baroness then took up the cause of finding good representatives of the breed—mostly owned by peasants—and she began to preserve and strengthen the Cirneco’s breeding lines.

The Cirneco dell’Etna is a medium-sized slender dog with a very light—but very strong—build. The eyes should be small, oval, and an amber or ochre color, (never yellow or brown) with an alert expression. The color of the eye rims should match the color of the nose. The ears are erect, rigid, and set very high and close together. The head is lean and the nose is large. Only a scissors bite is acceptable.

The neck is strong and well arched. The topline slopes from the withers to the croup. The ribs are narrow and the belly tucks up slightly. The tail, which is set low and reaches to the hock, should be fairly thick for its whole length. The dog carries it high and curved when moving, and in sabre position when resting.

The hindquarters are strong and muscular, with a light bone structure. There should be no dewclaws in the back. The feet are well knuckled, slightly oval, and straight. Pads and nails should be the same color (either brown or flesh colored, never black).

The coat is short on the head, ears, and legs, and longer (to 1.25 in.) on the body. The coat should be sleek and close, and have no feathering. The color should be uniformly light to dark tan or chestnut; a mixture of light and dark hairs, or mostly white, is acceptable. Brown (which is darker than tan), liver (which includes having a liver-colored nose), brindle or black patches, hairs, or pigmentation are disqualifications.

The Cirneco has a springy trot and the hind legs should track the forelegs.

Front dewclaws are not removed (per the breed standard). The Cirneco dell’Etna is extremely hardy and well adapted to working in the heat. However, the breed is sensitive to cold and can’t be left outside during cold weather.

The Cirneco dell’Etna is compliant and affectionate. Because it tends to be easily offended, it does best with very gentle training methods. Make no mistake, though—this is a lively, active dog that needs exercise, mental stimulation, and human affection to stay balanced, healthy, and constructive. In addition to his skill as a hunter (and lure courser), the Cirneco performs well in obedience and agility and makes a very good watchdog. Inquisitive and intelligent, the Cirneco thrives not only on human attention but also on human partnership. Early socialization is crucial for building the dog’s confidence and tolerance for children, other animals, and all manners of stimuli. Having a dependable recall is especially important, as the dog’s strong prey instinct can make him likely to run.

Books about the Cirneco dell’Etna