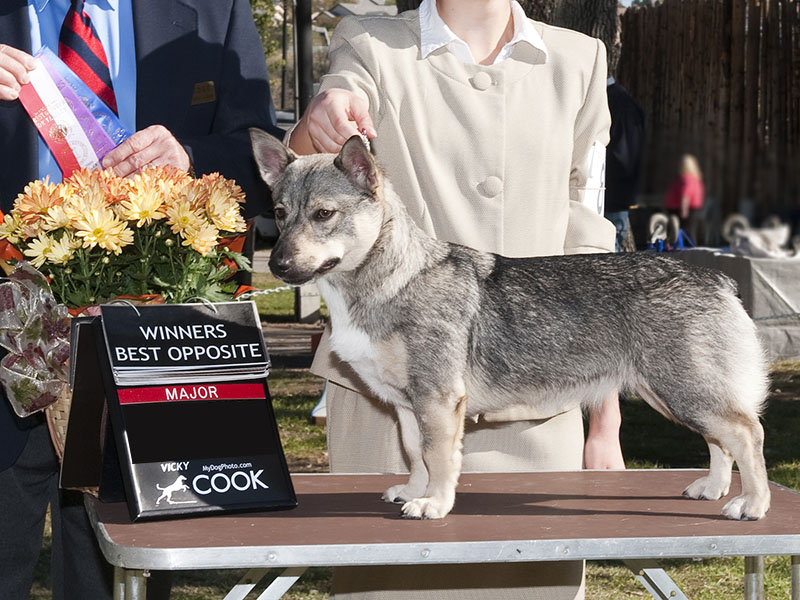 The sturdy little Swedish Vallhund has been traced back more than 1,000 years, to the time of the Vikings. In fact, the dog was at one time known as the “Vikingarnas,” or “Viking Dog.” The Vallhund was originally bred to herd cattle—with a short stature (good for nipping hocks) and an appropriate name (“Vallhund” means “herding dog”). Historians believe the Vallhund and Pembroke Welsh Corgi were interbred sometime in the eighth or ninth century, which is why the two breeds look similar today. The Vallhund was a popular farm and herding dog for centuries. Like many European breeds, however, its numbers were decimated during World War II, and by 1942, the breed had nearly become extinct. Fortunately, Bjorn von Rosen, a Swedish count who had worked to save other dog breeds in Sweden, found several existing Vallhunds and revived the breed. Just one year later, the Swedish Kennel Club ratified the breed standard, recognized the breed, and renamed it “Svenska Vallhund.” In 1964, the club gave the breed yet another name, “Västgötaspets,” which refers to the Swedish province from which the dog is believed to have originated. This name is still used in Sweden today. The first Swedish Vallhund was brought to England in 1974 and the first of the breed arrived in the United States in 1984. Today, the courageous little Vallhund thrives (and herds) in many countries, including Finland, France, the Netherlands, Canada, Australia, New Zealand, Ireland, Holland, Denmark, the United States, and Switzerland. The AKC accepted the Swedish Vallhund into the Herding Group in 2007.

A Spitz-type Nordic dog, the Swedish Vallhund is small yet powerful. This is a fairly short-legged, long-bodied dog, with the ratio of height to length of 2:3. The head is long, clean, and wedge shaped, with a well-defined stop. The ears are pointed and pricked, and the dark brown oval eyes are medium in size with black eye rims. The Vallhund’s neck should be long and strongly muscled. The topline should be level and the chest should show good depth. The abdomen should be slightly tucked up and the back and shoulders should be well muscled. The feet are medium sized, short, and point forward.

The Swedish Vallhund’s top coat is close fitting, hard, and of medium length. The undercoat should be soft and dense. The dogs are shown in a natural state—that is, without trimming. The coat color is a range of sable patterns of gray, red-yellow, gray-yellow, red-brown, or gray-brown. Lighter shades on the chest, belly, buttocks, lower legs, and feet are desirable. Narrow white blazes, neck spots, necklaces, or markings on the leg and chest are permitted, but these can’t make up more than one-third of the dog’s total color. Although a dark muzzle is acceptable, a well-defined mask (with lighter hair around the eyes, on the muzzle, and under the throat), giving a distinct contrast to the head color, is highly desirable. The dog’s coat also must show “harness markings” (lines of lighter-colored fur running down the sides along the shoulders). For showing, it doesn’t matter whether the tail is natural (long, stubbed, or bobbed), or docked. The Swedish Vallhund gives an impression of intelligence, courage, and energy. Because of the breed’s herding heritage, the Vallhund’s gait should have reach and drive and show great agility and endurance.

Like many Spitz breeds, Vallhunds tend to bark a lot, although they can be trained not to do this. The breed is generally hardy and not prone to health problems. The Swedish Vallhund Club of America, however, recommends that breeding dogs’ hips be certified by the OFA and their eyes be certified by CERF.

Called the “little Viking dog” by its admirers, this dog’s short stature belies a big, big spirit. Vallhunds are watchful, fearless, and energetic, but they are also extremely friendly, loyal, and eager to please. These fast, agile, little dogs love to be trained, to solve problems, and to work. They also love to play with (and sometimes herd) children (and adults)—and to accompany them on outdoor adventures. As this breed can be wary with strangers and protective, puppies must be well socialized and trained, and mature dogs need to be handled firmly. Breeders caution, however, that harsh training techniques do not work on this breed, as the Swedish Vallhund will shut down and stop responding to commands.

Books about the Swedish Vallhund