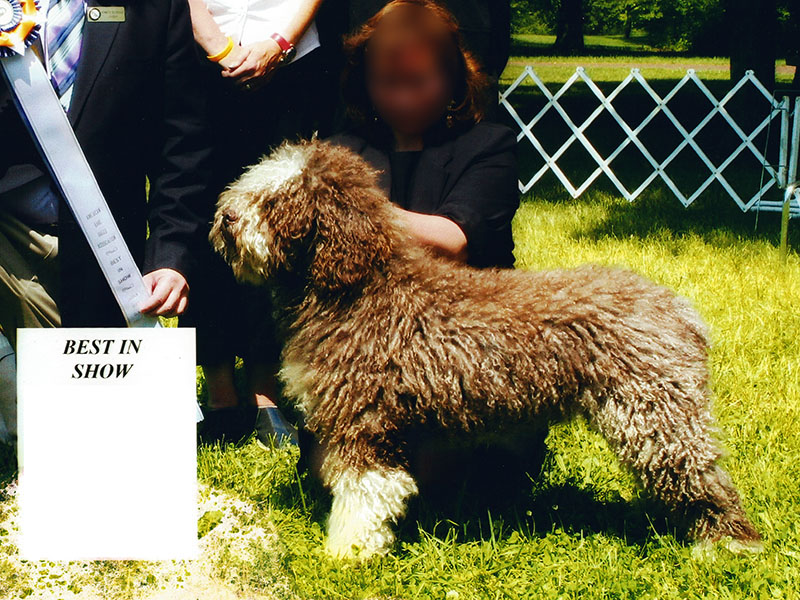 The Spanish Water Dog’s exact history is unknown. Some people believe the Turks brought curly-coated herding dogs to the Iberian Peninsula to work flocks of sheep and goats. Others believe the breed originally came from Northern Africa. What we do know is that the first mention of what sounds like a similar dog appears in 1100 A.D., and that by the eighteenth century, shepherds used these dogs to move livestock in semiannual migrations in Spain. The use of the dogs for livestock continued in Andalusia, which didn’t develop as fast as the rest of the country. The versatile dogs also were trained to assist fishermen in Spanish ports and to hunt waterfowl and game.

Known throughout the centuries as Perro de Agua, Perro Turco, Laneto, Perro de Lanas, Churro, and Turcos Andalucia, the Spanish Water Dog still herds cattle, sheep, goats, and pigs. The dogs also work in search and rescue, drug and bomb detection, agility, and obedience. Although a key part of Spanish history and culture, this very versatile breed wasn’t recognized by the Spanish kennel club (la Real Sociedad Central de Fomento de las Razas Caninas en España) until 1985 and by La Fédération Cynologique Internationale (FCI) until 1999. The first Spanish Water Dogs were imported to the United States around 1999 and the breed was accepted by the AKC’s Foundation Stock Service in 2005. The Spanish Water Dog entered the AKC Miscellaneous Class in June 2012 and the AKC Herding Group in January 2015.

Despite its adorable curly coat, the Spanish Water Dog’s general appearance should be one of strength and elegance. Its skull is flat and its stop is very slight. The nose should be either the same color or slightly darker than the rest of the dog. The eyes are very expressive and should range from hazel to chestnut in color. The ears, which are set at medium height, are triangular and drooping.

The neck is well muscled and set firmly into the shoulders. The topline should be straight and the back is strong. The withers are barely noticeable and the croup slopes slightly. The chest should be broad, the ribs well arched, and the belly slightly tucked up. The shoulders are oblique and well muscled, and the forearms should be sturdy. The feet are rounded; the nails can be of variable colors. The stifle should be well bent and the hock joint is low.

The skin is supple and tight and can be pigmented brown or black. The distinctive coat is curly and wooly, and might form cords when it’s long. The coat can be clipped for shows, but never less than an inch. It should look natural, not showy. Accepted colors are solid white, black, and brown, as well as white and black or white and brown. (Tricolored dogs and brown and tan dogs are not acceptable.)

The Spanish Water Dog’s tail is docked between the second and fourth caudal vertebra. Some Spanish Water Dogs are born with naturally bobbed tails. Dogs may be shaved once a year-more often if they’re not show dogs-to keep the coat and skin healthy. Puppies are born with curly hair; the cording, which looks like dreadlocks, usually begins sometime after the first year. Many dogs need help from their owners in cording the coat (this involves tearing mats of hair into smaller sections), but Spanish Water Dogs are never brushed or combed. People who are allergic to pet allergens tend to do well with this breed. Spanish Water Dogs are prone to hip dysplasia, allergies, prcd-PRA, and hypothyroid. Though incidents are not common, there have been some reports of Addison’s Disease, exogenic pancreatic insufficiency (EPI), glaucoma, and epilepsy.

Covered with a mop of cute curls, and extremely affectionate with owners, the Spanish Water Dog might look like an adorable house pet, but this is a serious working dog. As such, it needs a firm but gentle and experienced owner who can provide leadership to a dog who is intelligent, has a strong desire to work, is very focused on his owner and has the potential to become dominant. This is a very loyal and faithful breed—so much so that early socialization is crucial to keeping the dog’s protectiveness in check. Reserved with strangers, a Spanish Water Dog should not be timid or overtly aggressive.

Books about the Spanish Water Dog