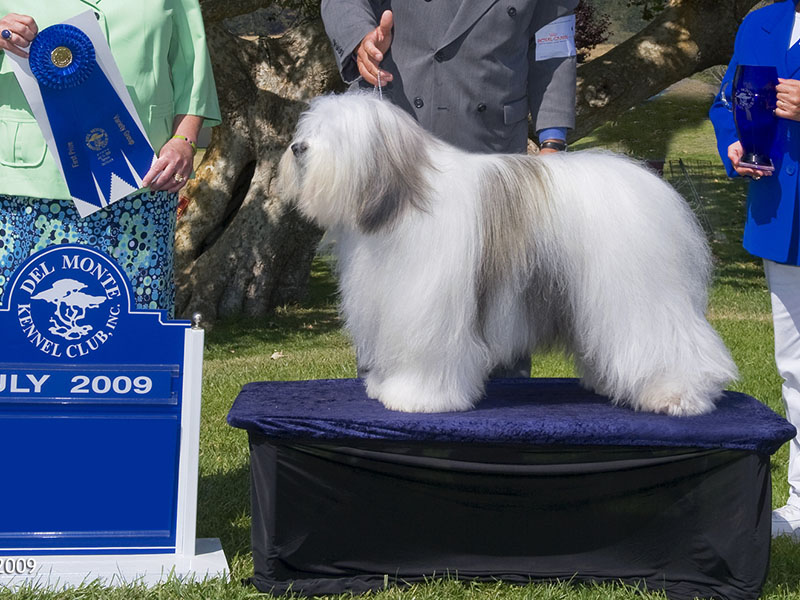 In its native Poland, the Polish Lowland Sheepdog is called the Polski Owczarek Nizinny, or PON. The dog’s roots stretch back to the Middle Ages, when other herding dogs were developed. As a cross between the Hun herding dog and the Hungarian Puli, the PON has always been a widely renowned herder. But during World Wars I and II, the PON breed was nearly decimated because bombing ruined the breed registries and wartime deprivations made it impossible for people to feed the animals. (Some Polish people were even forced to eat their own dogs.) Only 125 PONs survived WWI; only eight breedable PONs survived WWII. A Polish veterinarian, Dr. Danuta Hryniewicz, worked to save and reestablish the breed after the war ended; as one breeder notes, “all PONs today owe their lives to her efforts.”

The first PONs arrived in the United States in 1979. Moira Morrison, a Bearded Collie breeder, set about introducing the breed to the United States. Morrison was interested because it is widely believed that the Bearded Collie resulted from a sixteenth century cross between the PON and a Rough Collie. Betty Augustowski took over in 1982. Four years later, she founded the American Poland Lowland Sheepdog Club. The dog remains rare, however, with only about 2,000 living in North America and perhaps 10,000 found around the world. The AKC admitted the breed to the Herding Group in 2001.

The Polish Lowland Sheepdog has a long, dense coat with a soft under layer. All colors are acceptable, although the most common colors are white with black, gray, chocolate, or sandy patches, and gray with white, or chocolate and white. The color of almost all will lighten with age due to a genetic fading factor. The hair falls over the dog’s forehead, cheeks, and chin. Beneath all that shagginess is a strong cabby dog with a lively and intelligent gaze in its oval-shaped eyes. The tail is short; long tails are generally docked. Ears are hanging, heart-shaped, and medium-sized. Teeth meet in either scissors or level bite.

The general shape is rectangular, with a strong, muscular neck and shoulders, deep chest, and level topline. The dog has a long, fluid, extended gait that propels him well forward (although he’s capable of a leisurely amble as well).

The PON is not clipped in any way for show. The breed doesn’t suffer from many genetic problems. Hip dysplasia and eye problems do occur, however, so breeders should test their stock for hip dysplasia through OFA or PennHIP, and for PRA annually through CERF or OFA. As a rare breed, the puppies tend to be expensive.

This happy, alert, intelligent, loyal dog has an intense desire to please his master, a clownish style, and a remarkable memory. These traits make the PON a great companion. But like other herding breeds, the PON needs lots of mental stimulation in the form of dog work (obedience, agility training, fetching the paper, or herding your kids and cats) or pure play (catching a ball and Frisbee ®). The PON tends to be a kleptomaniac and chowhound (even a counter surfer), probably because these dogs used to have to forage for food during their stints herding sheep. (One breeder says, “First they’ll steal your hearts, then they’ll steal your underwear.”). They also have a famous “PON stare” that they use to get what they want, as well as a true smile to thank you for giving it to them—or for just being there.

The dog’s intelligence makes him extremely trainable, but his stubborn streak means he’ll often decide just what he wants to do and how he’ll do it. That willfulness calls for a fairly dominant, authoritative handler who will begin training the dog and exposing him to all kinds of people and situations as a puppy. (When not properly socialized, PONs can be timid or even aggressive.) PONs were bred to guard herds and so are wary of strangers, which makes them excellent watchdogs. They are intensely loyal to their human “flocks,” but generally aren’t good with very small children, because they’ll nudge and nip children to make them go where the dogs think they are supposed to be.

Books about the Polish Lowland Sheepdog