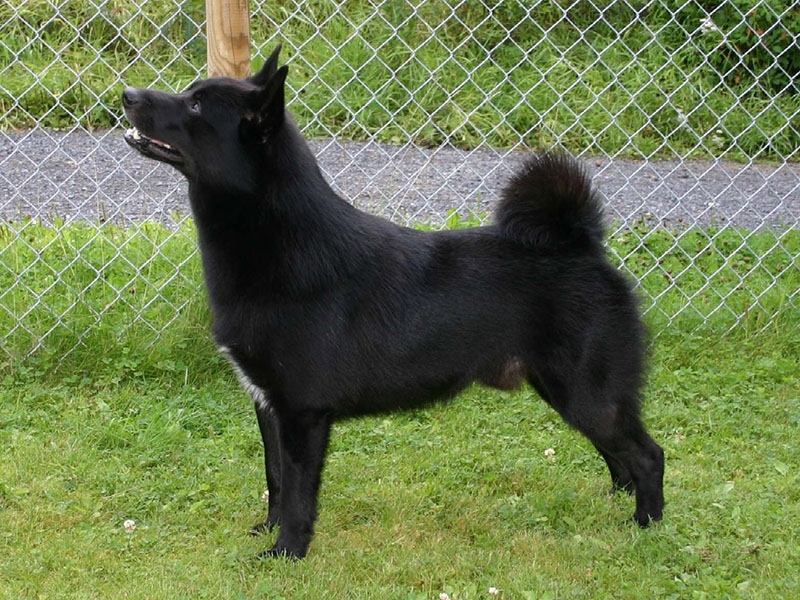 The Norwegian Buhund is an ancient breed—Buhund remains were found in a Viking gravesite created more than 1,000 years ago. This medium-sized Spitz served then, and still serves today, as a multipurpose farm dog, herding livestock and watching over the stock and the farm. The name comes from a combination of the Norwegian word “bu,” which according to several sources means “homestead,” and “hund,” which means “dog.”

For a long time, the breed was considered to be utilitarian, and was not thought of in terms of conformation dog shows. In the 1920s, Jon Sæland organized the first Norwegian Buhund show, and a breed club was established in 1939. The Norwegian Buhund is recognized by the FCI, as well as several other organizations and registries, and joined the AKC Herding Group in 2009.

In addition to its abilities as a herding and general farm dog, today’s Norwegian Buhund competes in conformation, obedience, and agility. This highly intelligent breed has also been successfully trained as a hearing assistant and in narcotics detection work. With the right socialization, training, and attention, the gentle, highly affectionate Buhund makes an outstanding family pet.

The Norwegian Buhund is a medium-sized, squarely built Spitz with mobile prick ears and a tightly curled tail held over the centerline of the back. The head is wedge-shaped and in good proportion to the body. It should not be too heavy. The muzzle is approximately the same length as the skull, with a well-defined stop. The lips are tightly closed and black, and the full set of teeth should meet in a scissors bite. The oval-shaped eyes are dark with black rims. The nose is black.

The chest is deep and from the front, and the forelegs are straight and parallel. The toes on the oval feet are tightly closed. Dewclaws are usually removed when puppies are 2 to 4 days old.

The double coat consists of a thick, hard outer coat and a soft, dense undercoat of different lengths on different parts of the body. On the head and front of the legs the coat is short compared with the rest of the body. On the neck, backs of the legs, and chest, the coat is longer. The most common color is wheaten, ranging from pale cream to orange, with or without a black mask. Black dogs are also accepted and may have some white in the coat (as little as possible) on specific areas. The face may have a narrow blaze, there can be a thin white ring around the neck, and/or the dog may have a small white patch on the chest. The feet can be white, and there can be some white at the tip of the tail.

Because this is a working breed that needs excellent stamina to do its job effectively, free, easy movement with a level topline is an important criterion in the show ring.

The Norwegian Buhund’s easy-care coat requires only a quick brushing once or twice a week to look its best during most of the year. However, this seasonal shedder blows his coat once in the spring and generally again in the fall. During shedding periods a daily brushing is best. A warm bath can accelerate the shedding process. According to several sources, the Norwegian Buhund coat naturally sheds dirt and is relatively odorless, even when wet. Some people even spin their dog’s sheddings into yarn.One of the Buhund’s strategies for finding sheep hiding on the hillsides in rural Norway is to bark to startle them into movement; this breed also tends to bark to communicate. Therefore, owners should be aware that they may need to train their Norwegian Buhund not to bark excessively.The Norwegian Buhund’s moderate size, general good health, and modest food requirements make him an easy keeper. The Norwegian Buhund is quite long-lived. It’s not unusual for Buhunds to live into their mid-to-late teens.The breed has a low incidence of medical conditions, but some hereditary cataracts and hip dysplasia have occurred. Hereditary cataracts can only be diagnosed by specialists. The condition is caused by a recessive gene, so it’s possible that any dog could be a carrier even if showing no evidence of cataracts. Most Buhunds that have this condition live normal lives with little or no impact on their sight. However, responsible breeders have their puppies screened for this condition at the age of 6 weeks and make sure their breeding stock has had recent eye certification. Buy from stock that has had these precautions and also has a good OFA or PennHIP rating for their hips.Though very popular in Norway, the Norwegian Buhund is still rare in the United States, so you may need to travel long distances to actually see the breed in person, and may also need to wait a long time for puppies, especially if you have a particular color or gender in mind.

Friendly, very affectionate with people, and gentle with children (especially when raised with them), the Norwegian Buhund is also a natural watchdog that will bark a warning sufficient enough to deter many unwelcome visitors. The guarding instinct can be strong as well, depending on individual heritage.

Norwegian Buhunds tend to have well-balanced, cheerful temperaments, but they need daily physical and mental exercise to be happy, as well as early and consistent socialization and training. If a Buhund gets bored, he may find activities that are not to your liking! Active and athletic, with a strong chase drive, Buhunds generally love a good game of Frisbee® or fetch. They are highly intelligent, quick learners that are eager to please, but they can also be headstrong and sensitive to harsh correction. Positive training methods without unnecessary repetition work best for this thinking breed.

Due to their strongly ingrained herding instincts, Norwegian Buhunds may attempt to round up anything that moves. Some will also hunt squirrels and other small animals, though they generally get along with other animals in the household, especially when raised with them.

Norwegian Buhunds may try to convince you to give them more food than they really need. Obesity can become an issue if you’re not careful.

Books about the Norwegian Buhund