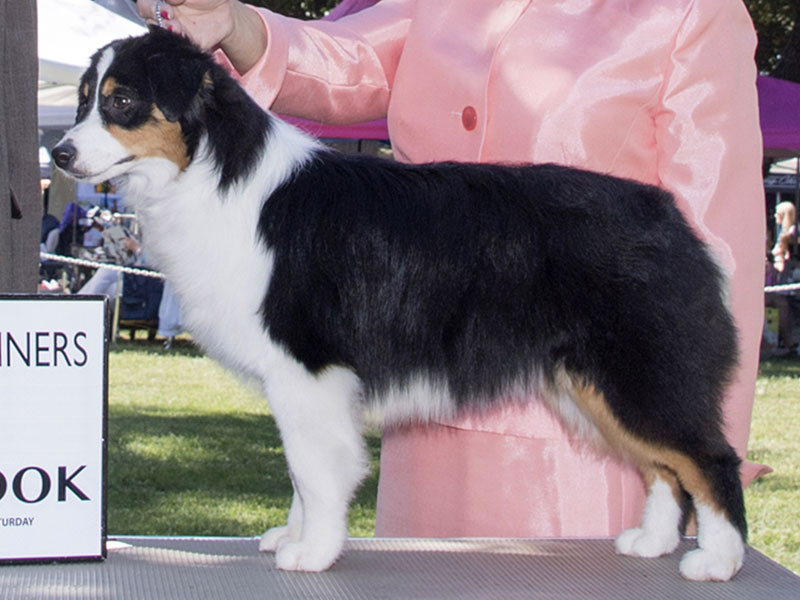 Breed historians believe that, over time, ranchers bred the dog to be larger, so that it could more effectively handle cattle. But historical photographs show that ranchers have long owned smaller-sized “Aussies,” today called Miniature American Shepherds. A deliberate breeding program didn’t begin until 1968, but throughout the 1970s and ’80s, a handful of breeders took up the cause of breeding smaller Australian Shepherds that could still work stock, but could also be companion dogs. They were first registered with the NSDR (National Stock Dog Association) as Miniature Australian Shepherds. Dogs less than 13 inches were registered as Toy Australian Shepherds.

In 2011, the Australian Shepherd parent club allowed the breed to separate into two. The smaller size entered the AKC FSS program under the name of Miniature American Shepherd. It quickly advanced to enter the AKC Herding Group in July 2015.

This diminutive version of its full-bodied cousin is increasingly popular—not only for its intelligence and athleticism, but also as a house dog and family pet. The dogs excel at canine sports such as agility, obedience, flyball, and disc.

Small, but strong, the Miniature American Shepherd is known for his stamina, intelligence, athleticism, and docked or natural bob tail. The head is clean and strong with a flat (or slightly rounded) top skull and a slightly tapered muzzle. The teeth meet in a scissors bite; the almond-shaped eyes are expressive and intelligent. The triangular ears should be set high at the side of the head.

The Miniature American Shepherd is slightly longer than tall, with bone that is moderate and in proportion to body size and height, without extremes. The neck arches slightly at the crest, the topline is level, and the whole body is firm and muscular. Front pasterns are thick and strong; hocks are slightly bent. Both rear and front feet are oval, compact, and have close-knit, well-arched toes.

The weather-resistant double coat is of moderate length and coarseness. The top coat can be straight to slightly wavy, but hair on the head, outside of ears, front of forelegs, and below the hocks is short and smooth. There should be some feathering on the backs of the legs; hindquarters have fuller feathering than the forelegs. Male dogs have a more pronounced mane and frill than females. Accepted colors include blue merle, red merle, solid black, and solid red. White markings and tan points are acceptable, but the areas surrounding the ears and eyes should not be white.

Rear dewclaws are removed; front dewclaws can be removed. The tail can be docked if the dog is not born with natural bob tail. This is a generally hardy, healthy breed, but some lines are prone to hip dysplasia and certain eye diseases, including iris coloboma (in which a hole in the iris allows too much light to enter the eye, resulting in squinting and impaired vision in bright sunlight); collie eye anomaly (a disorder that affects the parts of the eye that aid in night vision and protect the retina from glare in daylight); microphthalmia (abnormally small eyes); and progressive retinal atrophy (a degenerative disorder of the photoreceptors, which can result in blindness). In merle-to-merle matings, puppies that inherit merle genes from both parents (called “homogenous merle” or “lethal white”) may have severe health problems, including hearing and vision problems. (Note: Not every puppy born to two merle parents will inherit two merle genes.)This breed can carry the MDR1 gene, which makes the dog susceptible to negative reactions to certain drugs and medications. DNA testing for this gene is available. If the dog carries this gene, avoiding the use of those medications will prevent the negative reaction.

A working dog at heart, the Miniature American Shepherd is a smart, easy to train, and happy dog that loves his family and loves to work and play. Extremely athletic and blessed with high levels of stamina, these small dogs will plunge into just about any game (or job) you can offer them—including disc, agility, obedience and rally, herding, retrieving, tracking, dock diving, and swimming.

Their loyalty and attachment to their people make Miniature American Shepherds wonderful companions and family members. They tend to be reserved with strangers. They also tend to herd everything in sight (from kids to household pets), often by nipping. These herding and nipping habits need to be checked at an early age. Due to their intelligence and energy, Miniature American Shepherds, like many herding dogs, need lots of exercise and lots of mental stimulation to stay balanced and content. Left to their own devices, they can become bored and destructive. Early socialization is also key to keeping them well-behaved in public.

Books about the Miniature American Shepherd