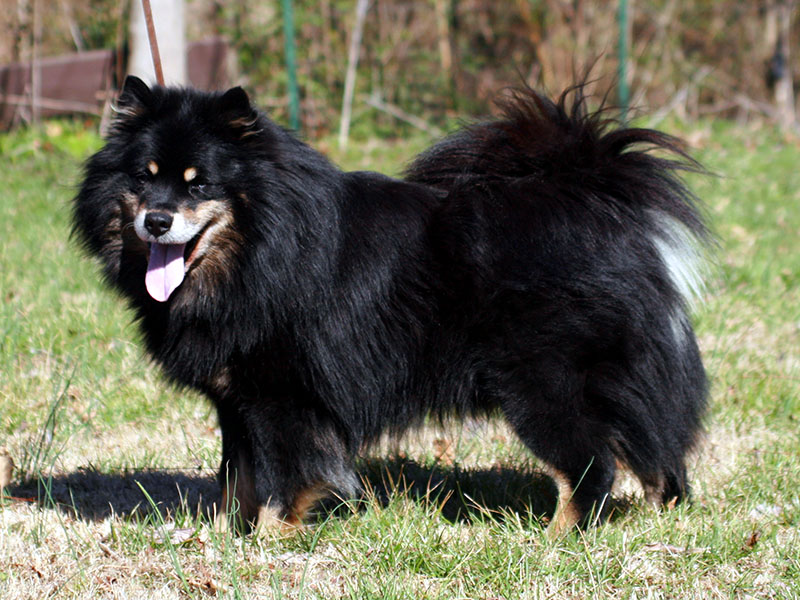 Evidence of the first Finnish Lapphunds dates back thousands of years, when the dogs appear to have been used as hunting and guard dogs for what was then a semi-nomadic people called the Sami, who lived in Lapland. As the Sami became more sedentary, their lives began to focus on keeping reindeer herds, and the Finnish Lapphund began to be bred for herding abilities.

During the 1920s and 1930s, a small group of Finns collected Lapphunds from Sami people still living in Lapland. A breed standard for what was then called the Lapponian Shepherd Dog was accepted by the Finnish Kennel Club in 1945. A separate breed standard for the longer-coated dog was accepted by the FKC in 1967—this separate breed was the Finnish Lapphund. While the Finnish Lapphund is still very rare in the United States (only a handful of breeders exist), it is the third most popular breed in Finland.

The first Finnish Lapphunds in the U.S. might have immigrated with Finns themselves. The first organized attempt to get a breeding program in this country began in 1987, when Linda Marden, then a Samoyed breeder in Tennessee, arranged for the importation of the first dogs. The breed was accepted into the AKC Miscellaneous Class in 2009.

Although the breed is rarely used for herding reindeer in Lapland these days, it has demonstrated a strong herding instinct on ducks and sheep in the United States. The Lapphund also excels at obedience, rally, tracking, and agility.

A medium-sized dog bred to live and work north of the Arctic Circle, the Finnish Lapphund looks like a classic northern (spitz-type) dog, but acts like a herding dog. Beneath his considerable fur, the Lapphund is a sturdy, well-muscled dog, but the expression should be soft. The top of the head is slightly domed; the stop is well defined. Eyes should be oval and dark. Ears are triangularly shaped and set well apart.

The front legs should be straight with well-arched, oval feet covered with a thick coat of hair. The toes should spread slightly to ease travel across snow. The rear legs also are straight (when viewed from behind) and should appear very strong.

The Finnish Lapphund’s coat is fluffy, with a thick, long outer coat (for repelling water) and an undercoat that is soft but so dense it makes the outer coat look bushy. There should be one primary color covering most of the body (although this color can include bands of different colors on each hair shaft for a sable or domino effect). The head, neck, and underside of the body, legs, and tail can be a different color.

The Lapphund’s double coat allows him to withstand very cold temperatures, but the dog is very vulnerable to heat. Special care should be taken in warm climates to provide shade, water, and air conditioning. Lapphunds are prone to hereditary cataracts, PRA (which can lead to blindness), and, more occasionally, hip dysplasia. The Lapphund is a heavy seasonal shedder.

This agile herder might appear somewhat reserved at first, but it’s actually a calm and cheerful dog. Lapphunds have a strong “startle” reflex, as they were bred to herd reindeer and had to watch out for being trampled. They make excellent family pets and generally love children and other dogs. They can bark noisily when strangers come into the yard but are not protection dogs. As working dogs, they need regular exercise and stimulation to prevent boredom. Their yards also need to be well fenced, as they are prone to following people or other dogs. Their keen intelligence and eagerness to please make them easy (and fun!) to train.

Books about the Finnish Lapphund