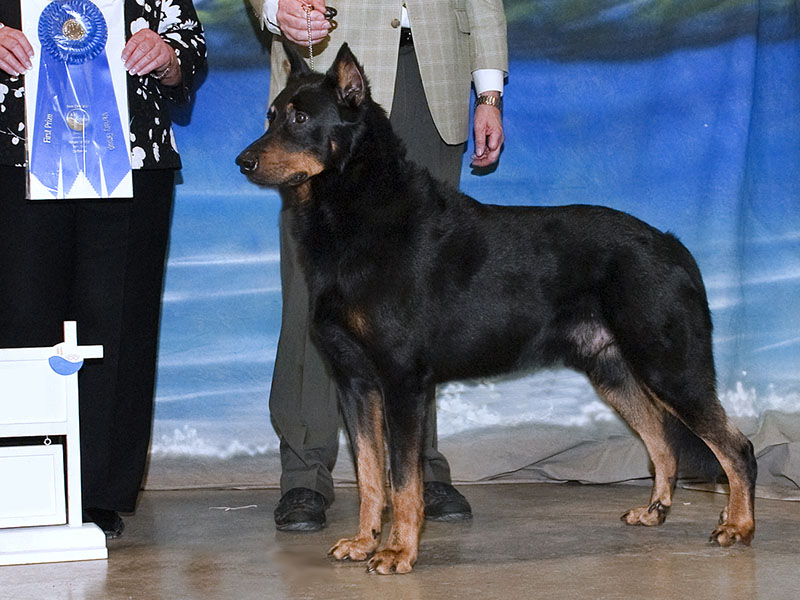 Though almost unknown outside of its native France, the Beauceron has a long history. The earliest record of what is thought to be a Beauceron dates back to a Renaissance manuscript of 1578. In 1863, Pierre Megnin differentiated two types of sheepdog: one with a long coat (the Berger de Brie, or Briard) and the other with a short coat (the Berger de Beuce, or Beauceron). Beaucerons are also called Bas Rouge (Red Stocking) because of the markings on their legs. The Berger de Beuce was shown in the first Canine Exposition in Paris in 1863, and in 1897, the first shepherd dog club was founded, including both the Beauceron and the Briard. In 1911, a separate club for the Beauceron was formed.

The Beauceron, like many sheep-herding breeds, is easy to train for tasks beyond care of the flock or herd. His calmness and ability to follow commands without hesitation was well illustrated during two major wars in Europe. The military used the Beauceron to run messages, pick up trails, detect mines, support commando actions, find the wounded, and carry food and ammunition to the front lines. The dogs performed their duties without being deterred by exploding bombs or artillery fire. Though the Beauceron is still used by the French police and army, the breed is now gaining popularity in Western Europe and North America as a family watchdog and companion. The breed also excels at obedience, herding, Schutzhund, French ring sport, agility and tracking. The Beauceron joined the AKC Herding group in 2007.

The athletic Beauceron gives an impression of strength, freedom of movement, and liveliness, without heaviness. The structure is similar to that of the Belgian Malinois except the Beauceron is larger—about the size of a large Doberman Pinscher. There are two coat colors: 1) Black and tan with specific tan markings—two lozenges above the eyes, tan on the bottom of the upper lip and throat, two tan spots on the breast, tan on the bottom of each leg, and a tan marking in the shape of a lyre under his tail, or 2) Harlequin, in which gray body markings are distributed evenly over the black of a black and tan base color. There should not be any white at all. The hair is short with longer fringes on the tail and hindquarters. The outer coat should be harsh, never soft or silky, and should be lined with a woolly, fluffy undercoat ensuring good thermal insulation. The Beauceron has a distinctive double dewclaw on the hind legs, making six toes per rear foot. The dewclaws must not be removed if the dog is to be shown. The ears are generally cropped, in which case they stand erect. Natural ears should be half-pricked with one-third of the ear erect. The fringed tail reaches at least to the hocks and is carried low in the shape of a letter “J.” The eyes are dark, horse chestnut color, with a proud and serious expression.

The Beauceron is slow to mature. Puppies can be very active. This breed should not be left alone for long periods of time.

Brave, faithful, and highly intelligent. Fearless, vigilant, and patient. The Beauceron has an aptitude for obedience training and is known for his quick and thorough understanding of his master’s desires. An excellent natural guard dog whose appearance and demeanor command respect. Happiest when working or exercising in wide-open spaces. An instinctive herder who will herd everything in sight unless trained to do otherwise. Calm, obedient, and very loyal. Eager to please his master. Gentle with children if raised with them, though this energetic, large breed can be overwhelming to a small child, even as a puppy (a 3-month-old puppy can weigh 40 lbs.). He is generally gentle with his own family, but might be aggressive with strangers. Thorough training with a firm master is absolutely necessary. Many are “one-person” dogs, bonding strongly to a single master (not necessarily the master the family intended!); the breed doesn’t take well to changes of handler. Even so, the Beauceron will obey commands from all members of the family if trained to do so. Beaucerons are sociable with dogs they know, but they are highly territorial and will not tolerate an intruder. They generally get along well with cats if they are introduced to them at an early age. This breed should be properly and thoroughly socialized and given lots of attention and exercise. The Beauceron needs a job to do and lots of space to express and use his energy; otherwise, he might show you that “laziness is the mother of all vices.”

Books about the Beauceron