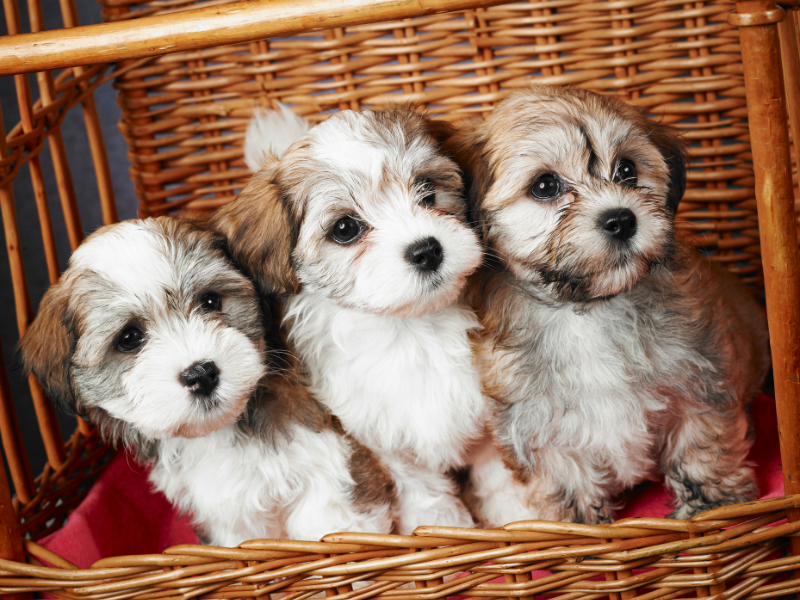 The Havachon (ake Frise Havanese) is a combination of a Bichon Frise and a Havanese. Sometimes referred to as the Cuban Velcro dog for their tendency to stay glued to their owner, the Havanese is a toy breed which is the national dog of Cuba. It is a member of the Bichon family and is believed to have been developed from crossing the Blanquito de la Habana with other Bichon types. The Blanquito de la Habana are now extinct. There is speculation that all Bichon dogs can be traced back to the Teneriffe dog and that these dogs arrived in Cuba on ships. The Spanish colonists in Cuba at the time became fond of these cute, sturdy little dogs and kept them as pets. During the Cuban revolution many were left behind when people fled to the United States although a few were brought over. They were only officially recognized by the American Kennel Club in 1996 but are very popular now. The Bichon Frise is believed to have been descended from dogs called barbets or water spaniels who were crossed with small white lap dogs. There are four types of Bichons: the Bolognese, Havanese, Maltaise and Teneriffe Bichons, which were developed on the Canary Island of Teneriffe and all originated in the Mediterranean area. It is believed they were brought to Teneriffe by Spanish sailors and then later Italian sailors found them and brought them home with them where they were prized by Italian nobility. The French invaders of Italy took them home with them and they lived with many royals including Henry III who is said to have carried his dogs around with him in a special basket.

Like many mixed breeds, the Havapoo’s appearance can vary, depending on the parents.

The charming Havachons are a designer breed, a cross between a Havanese and a Bichon Frise. These pups are sweet-natured, sassy, playful, and fun dogs known for their spontaneous bursts of bouncy joy and unconditional love. These pups love to cuddle, entertain, and make friends, and they are very fond of canine sports, games, and chew toys. With a Havachon around, boredom is not an option. Socializing in dog parks, walks, games of fetch, flyball, trips to the beach, and short hikes are what they crave and ask of their pet parents.

The Havachon is also known as Frise Havanese

Naturally friendly, the Havachons get along great with other dogs and household pets; they love kids and enjoy meeting new people

The Havachons or Frise Havanese dogs are small and cuddly with a happy demeanor and a friendly disposition. Their eyes are round, expressive, and dark, their noses small and black, and their tails fluffy and curled. These lovely dogs inspire affection and always appear in a fabulously good mood. The Havachon is small with an average height of 9 to 12 inches, and weighs between 10 to 15 pounds. The Havachon has a soft silky coat that can be wavy or curly in texture and can come in various colors such as white, black, tan, cream, gray, silver, golden, brown, or blue, and various combinations of these colors. The Havachon is a light shedder and a hypoallergenic breed that is a great fit for people suffering from pet-related allergies.

The Havachon is a sweet, sassy, and cheerful diva pooch who loves to entertain and bring on joy and giggles. This excellent dog craves the center of attention where all eyes are on him. He fancies cuddles, doggy belly rubs, praise, and any type of delicious reward.

The Havachons are small energetic dogs. They love to spend their energy by inviting their canine buddies for a chase and testing their speed. As a general rule, small active dogs like the Havachons aren’t built for endurance in heavy exercise. Havachons will be at their happiest and in their best shape with 30 to 40 minutes of daily exercise that include walks and plenty of play indoors.

The Havachon is generally a very healthy breed that is unlikely to suffer from life-threatening health issues. Because they are a crossbreed of two healthy purebred dogs, they benefit from hybrid vigor and are less likely to develop any of the health conditions that are common in the Havanese and Bichon Frise breeds.